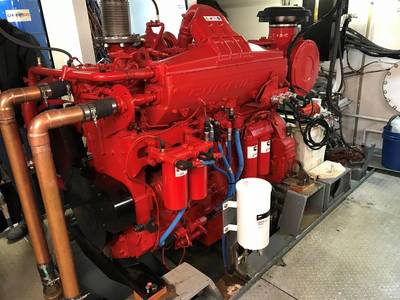 As sometimes happens with boats in the maritime world, the recent repower of a tug shone a light on a pair of well known independent companies. The tug Gretchen H. (ex Harry Olsen, Polar Breeze) was built by Rodriguez Shipbuilding of Coden Alabama in 1997 and is currently owned, since 2005, by Boyer Towing.

The Gretchen H is a good solid boat and her owners decided she was well worth a new set of engines. At 80 by 30 feet she has an eleven foot depth. As with many tugs out of the Rodriguez yard she has triple propellers and triple engines. She had an older set of engines rated at 700 HP each. The owners decided on three new Cummins QSK19 Tier 3 compliant engines rated for 750 HP each at 1800 RPM. The existing Twin Disc MG5202DC gears with their 6.1:1 ratios were a good fit for the new engines so they were retained.

Boyer did the repower themselves at their own Seattle yard. The old Luggers came out and the new, bright-red Cummins machines went in. The tug performed flawlessly on sea trials at the end of January and is ready to go back to work towing barges between Seattle, Wake Island, or Alaska.