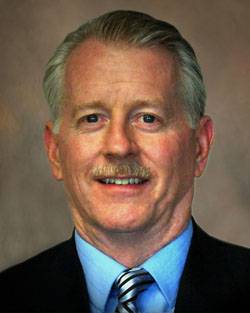 Fairbanks Morse Engine, an EnPro Industries (NYSE: NPO) company, announced that Paul Roden has joined the company as Vice President, Washington Operations. In this new role he will represent the company in discussions with Congress and with shipyards, as well as customers in the Departments of Defense and Homeland Security.
Mr. Roden joins Fairbanks Morse Engine from the U.S. Coast Guard, where he retired with the rank of Captain following a distinguished service career. His most recent assignment was Chief of the Office of Naval Engineering at USCG headquarters, where he was responsible for naval engineering support to all Coast Guard cutters and boats, including policy development, budget execution, training, competency standards, and organizational alignment.
Prior to that, Mr. Roden was Commanding Officer at the USCG Engineering Logistics Center in Baltimore, Maryland. During his twenty-eight year Coast Guard career, he served in a number of naval engineering assignments, both ashore and afloat, and has been active in leadership positions in the Society of Naval Architects & Marine Engineers (SNAME) and the American Society of Naval Engineers (ASNE). He is a 1983 graduate of the United States Coast Guard Academy, and in 1991 earned both a Master of Science in Mechanical Engineering and a Master of Science in Naval Architecture & Marine Engineering from the University of Michigan.
“Paul’s track record of engineering leadership and effective partnership with policy makers ensures he will be a very valuable member of our team,” said George Whittier, president of Fairbanks Morse Engine. “Going forward, he will play a key role as we continue to deliver top quality, mission critical propulsion and power generation systems.”