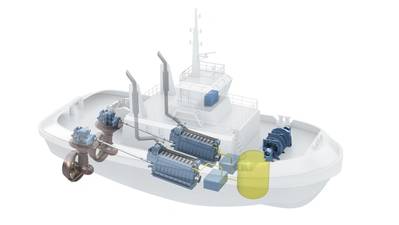 The two vessels have been ordered by Norwegian company Buksér og Berging AS and will enter service in late 2013 for Statoil, the international energy company, and Gassco, the operator of the gas transportation network off the Norwegian coast. Robert Løseth, Rolls-Royce, Senior VP - Merchant, Propulsion Systems and Engines said: “This is a breakthrough for our Bergen gas engines and cutting edge propulsion technology. The choice our customer has made highlights the industry leading engine performance, fuel consumption and low methane emissions that Rolls-Royce can offer, which is now being applied to tugs. ”

In addition to two gas engines and a single LNG tank, Rolls-Royce will deliver a mechanical direct driven azimuth propulsion system for each tug that will provide the quickest response time for manoeuvring; which is critically important for tug operators. The combined power and propulsion system will also enable the lowest possible fuel consumption in all operating modes. Rolls-Royce will also provide automation and control systems for the two escort vessels.

Commercial Director at Buksér og Berging AS, Vetle Sverdrup said: “We wanted to base the design of the new tugs on the spark ignition lean burn engine concept, and the ability to accommodate direct drive in addition to a low emission profile. The propulsion system on high performance escort tugs needs to accommodate rapid load pick up over the entire load range. Due to the above we chose to work closely with Rolls-Royce on this project.” The scope of supply for Rolls-Royce in this contract is:

The LNG system is designed by AGA Cryo and integrated with the Rolls-Royce propulsion system. This single tank LNG system has got full gas redundancy approved by NMD (Norwegian Maritime Directorate) i.e. no diesel back up is required. The operational benefits of a gas fuelled propulsion system are a cleaner engine room, less waste oil and no “switch over” problems. The new gas engines are also service friendly and needs less maintenance. The gas engines can operate on low load with out any restriction and have a very quick and step less ramp up time from 0 to 100% load.

The fuel system is designed for weekly bunkering intervals and the bunkering time is estimated to be 45 minutes. Bunkering will be carried out by the ships crew. Nox emissions are lower at low engines loads, which are the reverse trend of most diesel engines, making it the optimal solution for tugs which are spending most of the time at lower engine loads. Environmental benefits with S.I. gas engines:

The vessels are designed by Buksér og Berging AS together with Marin Design AS in Kolvareid, Norway. The project was developed in close contact with Rolls-Royce giving Rolls-Royce a unique opportunity to understand and adhere to operational requirements. The vessels have the following specifications: