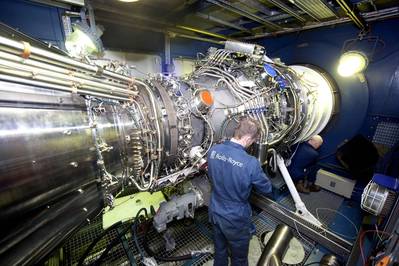 Rolls-Royce reports it has been selected to supply its MT30 gas turbine to power a new class of frigates for the Japan Maritime Self Defence Force (JMSDF).

The selection means Japan is the fifth nation to select the MT30 for a major naval shipbuilding program.

Sam Cameron, Rolls-Royce, Senior Vice President – Defence, said, “Japan’s selection of the MT30 is very significant and means that the three largest users of marine gas turbines, have all endorsed the capabilities of the MT30 and selected it to power significant future programs.

“The MT30 is the world’s most power dense marine gas turbine in service today, a key feature for naval ships where high power in minimum space, whilst meeting the operational power demands of the future, is essential.  The increased demand for power by the world’s navies is a clear trend and for Japan we will deliver a power rating in excess of 40 megawatts, the highest so far for this gas turbine unrestricted by global climate conditions.

“The power and performance of this modern gas turbine is providing shipbuilders and system designers with new options, choices and the ability to futureproof their latest naval platforms, combined with the additional benefits of through-life power retention with ultra-low on-board maintenance requirements.

“We have a long and successful history of powering Japan’s naval fleet which stretches back almost 50 years and our strategic relationship with local partner Kawasaki Heavy Industries has seen us provide more than 200 gas turbines. We look forward to the next chapter in this successful relationship with 30FFM.”

Construction of the first of the 30FFM class frigates will begin next year, with entry into service expected around 2022.

The MT30 recently powered the U.K. Royal Navy’s new aircraft carrier HMS Queen Elizabeth during a program of sea trials. It is also powering the U.S. Navy’s Freedom Class variant of the Littoral Combat Ship as well as the new DDG-1000 destroyers. The Republic of Korea Navy’s first FFXII frigate, powered by a single MT30, entered service earlier this year and Italy has selected the engine for its new Landing Helicopter Dock program.

U.S.-based Fairbanks Morse said it has been awarded a purchase order by Huntington Ingalls Industries (HII) to build and…