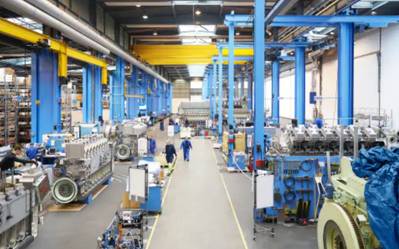 TMH Group, based in Russia, is an engineering company in rail transport technologies and the world’s fourth largest supplier of rail rolling stock. It offers a range of products and services including medium-speed engines for rail applications with current production of more than 850 engines a year. Established in 2002, TMH is privately-owned and employs 100,000 people across 25 sites worldwide.

Bergen Engines, based in Bergen, Norway, will be operated as a stand-alone business by TMH International, which is headquartered in Switzerland. TMH International already operates in Argentina, Cuba, Egypt, Germany, Hungary, Israel and South Africa.

The agreement follows a strategic review by Rolls-Royce of Bergen Engines announced in February 2020. The sale includes the medium speed engine factory, service workshop and foundry in Norway; engine and power plant design capability; and a global service network spanning more than seven countries. Since 1946, Bergen Engines has supplied over 7,000 engines to marine and power generation customers worldwide, of which around 4,000 are still in operation. Bergen Engines’ long-term relationship with Kongsberg Maritime, distributor of Bergen medium speed engines to the maritime market, is planned to continue as is.

Bergen Engines has been a part of Rolls-Royce since 1999 and has approximately 950 employees, with the majority based in Bergen, Norway. In 2019 the business generated revenues of $325 million which were consolidated within the results of our Power Systems business.

The transaction has been approved by the boards of both Rolls-Royce and TMH and is expected to close in the second half of 2021.