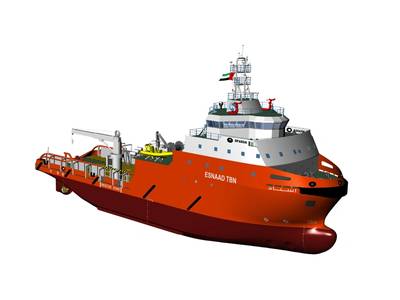 Rolls-Royce has signed a contract with Sinopacific Shipbuilding Group (Sinopacific) in Shanghai for a package of power and propulsion equipment and deck machinery.
The contract is to equip nine SPA80A Anchor Handling Tug Supply vessels to be designed and built by Sinopacific Shipbuilding Group and owned and operated by the Abu Dhabi National Oil Company (ADNOC) and its wholly-owned subsidiary, ESNAAD.
Each ship will have a bollard pull of 80 metric tons, and be equipped with Bergen diesel engines, main and tunnel thrusters, electrical power system and a deck machinery package from Rolls-Royce.
JIANG Qiang, Chief Executive Officer of Sinopacific said: “The visit of Rolls-Royce senior executives to Sinopacific in 2013 reinforced the relationship between our two companies as did the provision of  Rolls-Royce integrated equipment packages for Sinopacific’s in-house designed SPA150 AHTS series. This was a first for Rolls-Royce in the Chinese market.”
The vessels will be built at Sinopacific’s Zhejiang Shipyard and the first vessel is due for delivery in 2017.
• Abu Dhabi National Oil Company • Deck machinery • deck machinery package
Email