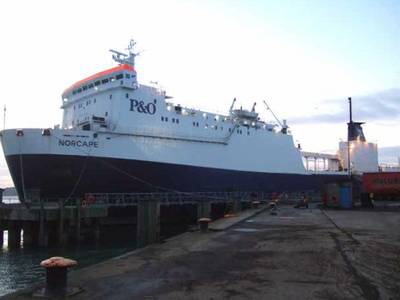 On 26 November 2011, the port windlass of the UK registered Ro-Ro vessel Norcape suffered catastrophic damage during an attempt to weigh anchor in near gale force winds. At 0354 the wind was south westerly 30 knots when the vessel anchored in Brodick Bay, Isle of Arran, with 8 shackles on the port anchor and the starboard anchor on the seabed to reduce anticipated yaw.

A short time after anchoring, Norcape began to yaw, the intensity of which increased steadily until, at 0536, the vessel yawed through 150 degrees and the port cable began to slip through the windlass. The decision was taken to get underway, and the starboard anchor was weighed. The crew then began to weigh the port anchor, using engines to reduce the load on the cable. The wind strength was increasing steadily and the windlass struggled to recover the cable when, suddenly and without warning, the dog clutch shattered and the cable payed out to the bitter end. The cable was subsequently slipped and Norcape was taken out of service due to the damage to the windlass and the loss of her anchor.

Key issues:
•    Crew were not aware of:
◦    the operational limits of the vessel’s bowthruster.
◦    the strength of the vessel’s anchoring equipment.
•    Passage planning – abort position was not used as a formal trigger to review entry to port.
•    Bridge team’s situational awareness was compromised by lack of information flow to the conning station.
•    Incident Management team, ashore, required a more proactive approach to assist on-board decision making.
•    No harbour authority towage or wind speed guidelines in place for Troon .
•    Absence of a compulsory pilotage regime in Troon meant bridge team did not benefit from local knowledge exchange with harbour master.

More detailed information in the form of a 'Web Flyer' is available here.