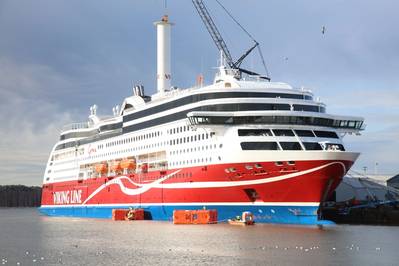 A Norsepower rotor sail was installed on board the passenger vessel Viking Grace (Photo: Norsepower)

The rotor sail, developed by Finnish engineering company Norsepower Oy Ltd., is a modernized version of the Flettner rotor: a vertical spinning cylinder that uses the Magnus effect to harness wind power to propel a ship. When wind meets the spinning rotor sail, the air flow accelerates on one side of the rotor and decelerates on the opposite side. The difference in the speed of the air flow results into a pressure difference, which creates a lift force that is perpendicular to the wind flow direction. This allows the main engines to be throttled back, saving fuel and reducing emissions.
The solution is fully automated and senses whenever the wind is strong enough to deliver fuel savings, at which point the rotors start automatically. The system will shut down in response to any disadvantageous changes in the direction or force of the wind.
At 24 meters tall and 4 meters in diameter, the rotor installed on board Viking Grace is expected to slash the vessel’s fuel consumption and reduce carbon emissions by up to 900 metric tons annually as it sails for operator Viking Line on wind-assisted voyages in the Baltic Sea between Turku, Finland and Stockholm, Sweden.
The rotor installation, which received funding from the European Union’s Horizon 2020 research and innovation program, boosts Viking Grace’s already impressive environmental credentials. In operation since 2013, the vessel is among the most environmentally friendly passenger ships in the world; it is fueled with liquefied natural gas (LNG) and has very low emissions and noise levels.
“As an Åland shipping company, we rely on the sea for our livelihood so it’s of prime importance for us to promote the well-being of the marine environment. We want to pioneer the use of solutions that reduce the environmental load,” said Viking Line CEO, Jan Hanses. “We are proud of the fact that our Viking Grace will be the first passenger ship in the world to benefit from this innovative solution.”
The basic design and idea for the Flettner rotor has been around for more than 90 years, but the rotor sail concept has gained interest in the global maritime community with the rise of increasing environmental regulations. Growing interest in the technology is further fueled by the advancements in manufacturing, material and technological solutions.
“The last traditional windjammers in the world were owned and operated by shipping companies based in Åland, so it’s only fitting that Åland-based Viking Line should be a forerunner in launching modern auxiliary sail technology,” said Norsepower CEO, Tuomas Riski. “Viking Line and Norsepower have collaborated in an excellent manner in retrofitting the rotor sail solution on the Viking Grace, and the completion of this project is a great moment for all those involved.”
In addition to the installation onboard the M/S Viking Grace, Viking Line will also install two Norsepower rotor sails onboard a newbuild cruise ferry vessel which is currently being built in China and due to be operational in 2020.
• Baltic Sea • European Union • Finland
Email