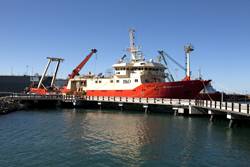 Diesel technology specialists from Royston Australia completed a three-week overhaul of the engines of the P&O Southern Supporter while it was docked in Henderson Fremantle, Western Australia. The project required the eight-man Royston team to work 24 hours a day, seven-days a week to service and re-build the ship’s three Cat 3516 engines. This included a complete strip-down of the engines, replacing the main bearings, overhauling the cylinder heads, upgrading liners with spacer-plate modifications. The work also included camshaft grinding on one of the engines and the overhaul of all ancillary components. The work was undertaken as part of the ship’s 60,000 hour Lloyds certification overhaul and Royston won the contract.
The P&O Southern Supporter has an Ice Class 1A rating and is well-known in the Southern Ocean where it has been operating extensively since it was launched in 1993.  The 74-metre vessel is equipped with an A-frame and crane which enable it to perform a wide variety of survey, maintenance and supply tasks.  Engine performance and reliability are critical for the ship that has been used to take equipment and personnel into Antarctica. The vessel has also previously been involved in some highly publicized long-distance chases of boats believed to be fishing illegally in Australian waters. The ship will now resume its long-term charter to a major survey company operating in the Western Australian offshore oil and gas industry.
The P&O Southern Supporter was originally designed for deep-sea trawling with three cargo holds and it can reach a speed of 12 knots when fully loaded. It has a helideck, is fitted with state-of-the-art survey and navigational equipment and offers a high standard of accommodation and related scientific and technical facilities, workshops and spaces.
Royston Ltd is headquartered in Newcastle-upon-Tyne, UK and opened Royston Australia in Perth in 2008.
www.royston.co.uk