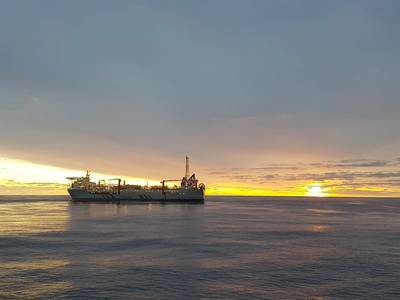 Royston said it has completed the overhaul of a critical power system on board the Bluewater Services operated floating production, storage and offloading (FPSO) vessel Aoka Mizu.

The diesel power specialist said its team of engineers undertook the 6,000-hour service on the MAN 32/40 STX diesel generator B on board the 88,000 dwt floater as part of a planned refurbishment and refit of essential power systems.

Work on the vessel, which is currently on contract to Hurricane Energy for the early production system (EPS) on the Lancaster field, west of Shetland, in the UK, saw engineers dismantle the generator to complete maintenance and repair work on con rod bearings, pistons and cylinder heads. Engine components were refurbished on board and new OEM spares fitted as necessary.

This is the latest work Royston has completed on Bluewater Services’ vessels – it has previously carried out extensive work on the FPSO Haewene Brim as part of a series of planned engine overhauls.

The Aoka Mizu is part of a five-strong fleet of FPSO vessels owned by Bluewater Services, with the Aoka Mizu and Haewene Brim being operated from Aberdeen. They are all designed to a high specification and to operate in the harshest environmental conditions, under the most stringent regulatory regimes.

Corvus Energy, an energy storage solutions provider for the offshore energy industry, has won a contract with Wärtsilä to…