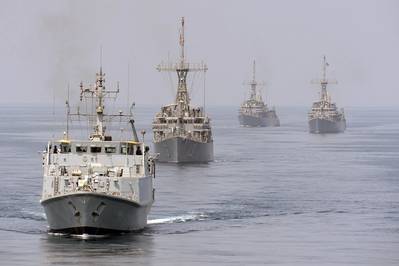 HMS Shoreham, which will be supported under the contract, operating out in the Persian Gulf and leading USS's Sentry, Devastator and Dextrous during an International Mine Counter Measures Exercise (Crown Copyright).

Royston has won a multimillion pound contract to support and maintain small diesel engines onboard amphibious assault ships, mine hunters and other Royal Navy vessels, the marine engineering and propulsion specialist said Wednesday.

The £5.5 million ($7.2 million) five-year Ministry of Defense (MOD) contract will see U.K.-based Royston responsible for providing diesel engine spares and technical support alongside repair and refurbishment of engines when required.

Diesel engines are used to provide either electrical or propulsion power for these ships, so the MOD sees the support contract as essential to maintain engine availability for both the Royal Navy and RFA fleets.

In addition to the supply and overhaul of all spare parts, Royston will also have responsibility for the diagnostic, technical support and servicing of engines either onboard vessels or those sent for repair to its workshop facilities in Newcastle-upon-Tyne.

Sarah Wade, CEO at Royston, said, “This contract reflects the engineering skills, capabilities and expertise that we can provide to customers around the world. We will be working closely with the Royal Navy and RFA, who are investing in their supply chain partners to secure service quality, consistency and improved operational efficiencies.”

The contract was negotiated by the Marine Diesel Group within Defense Equipment and Support (DE&S), the procurement arm of the MOD. Team leader, Commander Richard McHugh, said, “This was an excellent example of DE&S and industry working together to provide a value-for-money support contract for small diesel engines within the Royal Navy fleet.”

Rotor Sails To Be Installed on CLdN RoRo

Waterjets For CTVs: Debunking The Myths

With more wind farms sprouting up in Europe, Asia and now here in the United States, a steady stream of crew transfer vessels…