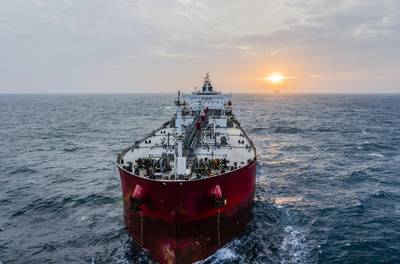 Under the joint development program (JDP) agreement signed between the two firms in July 2021, the partners will aim to develop ammonia-fueled vessels with four-stroke auxiliary engines available for future newbuild projects.

Ammonia, which continues to gain interest as a marine fuel worldwide, is among key alternative fuel options currently being considered for net zero operations, in line with the targets set up by the International Maritime Organization (IMO) to reduce greenhouse gas (GHG) emissions in the maritime sector by 2030 and 2050.

According to SHI, the most likely initial newbuild targets for ships utilizing ammonia fuel will be container vessels and very large crude carriers (VLCC), operating with two-stroke main engines and four-stroke auxiliary engines.

Wärtsilä, which has considerable experience developing engines for operation on future clean fuels, said it has already successfully tested an engine running with a fuel mix containing 70% ammonia. The company said it anticipates having an engine concept capable of operating with 100% ammonia in 2023.

“There is a lot of interest from owners and operators in the potential for new clean-burning fuels, and ammonia is thought to be among the most promising of these candidates. Wärtsilä has already made significant progress in testing ammonia, and we are pleased to work together with them to bring this to reality,” said Youngkyu Ahn, Vice President, SHI.

“Decarbonization has become the industry’s goal, and we at Wärtsilä are committed to doing everything possible to achieve this ambition. The adoption of a new generation of carbon-free fuels is central to a decarbonized future for shipping, so this JDP agreement represents an important step forward,” said Östen Lindell, Sales Director, Wärtsilä Marine Power.

Classification society ClassNK informs it has released the "Guidelines for Ships Using Alternative Fuels (Edtion 2.0)," which…