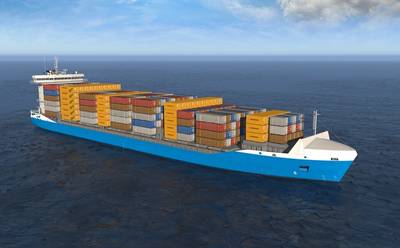 The ships are being built at the Yangzhou Guoyu Shipbuilding yard in China, and are expected to be in operation during the latter part of 2016. They will operate on a long term charter contract for Containerships OY of Finland.

Firm orders have been made for four vessels, say Wärtsilä, and more ships are likely to be built as part of the same series.

The selection of the new Wärtsilä RT-flex50DF engine is significant as it means that these ships will be the first container ships to use Wärtsilä's 2-stroke, low pressure, dual-fuel technology. When introduced last year, this technology was hailed as being the 'game-changer' for the marine industry because of its innovative features and the fact that it makes gas fuel operation potentially possible for virtually all vessel types. When operating in gas mode, the engine meets the IMO's Tier III regulations without need of any secondary exhaust cleaning systems.

"When our 2-stroke, low pressure, DF technology was introduced we knew that we had gone beyond merely extending our DF engine portfolio. This is an engine that really makes a positive difference to the global shipping sector. It not only meets the Tier III requirements when operating with gas fuel, but it also offers considerable CAPEX and OPEX savings. It is truly an engine that fits the needs of today's market," says Rolf Stiefel, Director, 2 Stroke Sales, Wärtsilä Ship Power.