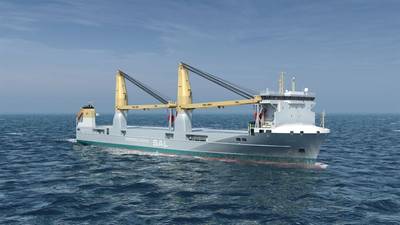 Finland-based marine engine and technology provider Wärtsilä will supply its hybrid propulsion system for four new heavy lift vessels being built at the Wuhu Shipyard in China.  The ships are set to be delivered in 2025, and they will mostly be used to help set up wind farms.

The vessels have been contracted by SAL Heavy Lift GmbH, a German heavy lift and project cargo specialist and part of the Harren Group, in cooperation with its joint-venture partner, Netherlands-based Jumbo Shipping. There is an option for an additional two vessels.

According to Wärtsilä, the heavy lift vessels will be the first methanol-capable ships to employ a variable speed main engine.

The hybrid system also includes Energy Storage, a PTO/PTI generator and motor, a multidrive converter, and the Wärtsilä Energy Management System for controlling and optimizing the hybrid operations.

The Energy Storage system will be based on Lithium-Titanium-Oxide (LTO) batteries, which can handle higher amounts of deep cycles than normal Lithium-Ion based systems.

"The ESS will significantly reduce the fuel consumption and/or the necessary size of the port's electric shore connection during crane operations while also providing fuel savings at sea by reducing Engine Load fluctuations in rough seas," Wärtsilä said.

For each vessel, Wärtsilä will also supply the gearbox, the controllable pitch propeller (CPP), the bow and stern thrusters, air shaft seals, as well as the sterntube and bearings.