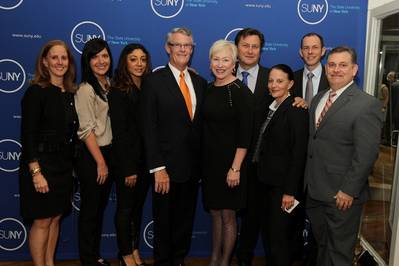 In recognition of the strong partnership between Wärtsilä and the State University of New York, Maritime College, the University nominated Wärtsilä to be inducted as a ‘2013 Transformer’ of the Chancellor’s Society. This level recognizes donors that have been major supporters of SUNY programs; contributing $1 million or more cumulative lifetime gifts to advance higher education in the State of New York.

Frank Donnelly, Managing Director, Wärtsilä North America, accepted the tribute on behalf of Wärtsilä and was joined by the Consul General of Finland in New York, Jukka Pietikäinen and administration from SUNY, Maritime College.

“Wärtsilä is pleased to be recognized by the SUNY Chancellor’s Society with this fine distinction. We look forward to continued collaboration with SUNY, Maritime College in developing future generations of marine engineers,” stated Frank Donnelly.

This past July, Wärtsilä hosted SUNY, Maritime College students at its factory during their port call in Trieste, Italy while aboard the College’s training ship. The cadets were part of the annual Summer Sea Term.