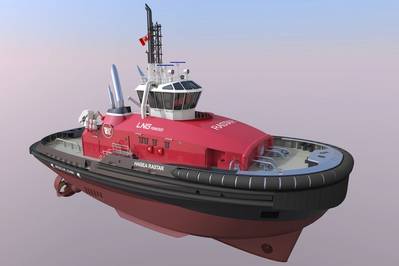 The tugs have been designed by Vancouver-based Robert Allan Ltd. (RAL). The larger RAstar 4000 DF vessels will be the most powerful Azimuth Stern Drive (ASD) escort tugs on Canada’s west coast, and will rank among the world’s highest-performing escort tugs.

At 40 meters in length and with over 100 tonnes of bollard pull, they will generate indirect escort forces of approximately 200 tonnes. ASD tugs are equipped with two stern engines capable of generating a 360°, all-directional propulsion force.

The RAstar 4000 DF escort tugs will perform the majority of their missions using natural gas as their primary fuel. This allows major emissions reductions compared to conventional diesel tugs of the same power, in compliance with the most stringent emissions standards in the international marine industry. In addition to these environmental benchmarks, the escort tugs will be capable of pollution response/oil spill recovery, firefighting of marine terminal fires, person overboard response, and emergency towage of vessels.

At 28 meters in length, with approximately 70 tonnes bollard pull and 6000 kWh of battery capacity each, the first-of-class ElectRA 2800 battery-electric harbor tugs will perform all of their ship-berthing and unberthing missions on battery power alone. Bollard pull is primarily used for measuring the strength of tugboats, with the largest commercial harbor tugs having around 60 to 65 tonnes-force.

With ample clean hydroelectric power available in Kitimat, the harbor tugs will be able to recharge from dedicated shore charging facilities at their berths between jobs, effectively resulting in zero emissions.

Robert Allan Ltd. (RAL) President and CEO Mike Fitzpatrick welcomes the opportunity to work with this project, noting that his firm already has a longstanding relationship with Seaspan and Sanmar, and said, “Robert Allan Ltd. are thrilled that Sanmar has been chosen by HaiSea Marine to build these ground-breaking tugs for LNG Canada’s new export facility.  We are especially eager to see these tugs built because they will be operating in our local waters here in British Columbia. Both the dual fuel escort tugs and the battery electric shiphandling tugs will set the gold standard for reduced emission tugboats for the next decade.  All of the significant steps forward in tugboat design made by Robert Allan Ltd. in the past several decades have come on projects like this where we have a challenging set of operational requirements, an experienced operator that is focused on the total cost of ownership rather than just the capital cost, and a high quality shipyard like Sanmar that can build these technically advanced vessels right the first time.”

Ali Gurun, Vice President of Sanmar, said, “We are very excited that HaiSea Marine has chosen Sanmar for building and delivering the two technologically advanced dual fuel escort tugs and the three battery powered harbor tugs that will serve LNG Canada’s new export facility in Kitimat, British Columbia. The 5 vessels, including the option for a sixth, will be among the world's most technologically advanced tugs ever built as a fleet.

“The bidding process included complexities in the tug designs which involve state-of-the-art new technologies. It is a sign of our ongoing good relationship with Seaspan, who have previously bought two 24-meter 75-tonnes bollard pull tugs from our fleet, the second of which recently left Turkey for her 60-day maiden voyage to Canada.

“We were able to offer achievable proposals that matched their vision for future requirements at Kitimat, with powerful tugs operating with minimal impact on the environment. Backed by more than 40 years of expertise and with unrivalled state-of-the-art facilities, Sanmar is proud to be leading the drive to a more sustainable and environmentally-friendly tugboat industry.”

Frank Butzelaar, Seaspan Marine CEO, said, “Signing this contract with Sanmar brings HaiSea one step closer to delivering on the promise made to the Haisla Nation when this partnership was conceived over a decade ago. These vessels represent the future - they are revolutionary in both their technology and their ability to create opportunity for the Haisla people. This remains HaiSea’s promise.”