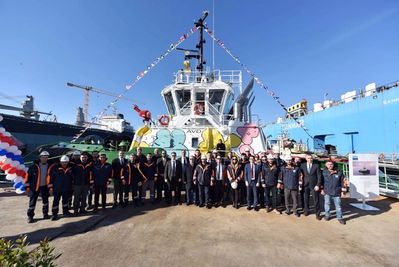 The BOĞAÇAY 38 enters the industry as the world’s first AVD vessel. The ceremony took place in January 2020 at the Sanmar shipyard in Istanbul, Turkey, and the tug is scheduled to soon join the Sanmar towage fleet.

BOĞAÇAY XXXVIII  is a Robert Allan Ltd. designed Ramparts 2400SX harbor tug, including an integrated Caterpillar AVD system of 3512 main engines, a C32 auxiliary engine, Cat MTA 627 fixed pitch tug thrusters, and bridge controls. The tug is the 200th Robert Allan Design for Sanmar and it is a milestone for the designer and the builder. Inspired by Andy Warhol’s famous print entitled, “Flowers”, the tug has been painted to a green hull and is embellished with colorful flowers on the deckhouse.

The Cat AVD is an integrated propulsion system that is said to optimize engine and system operation independently of propeller speed while supplementing power hydraulically. Thus, resulting in superior vessel response and performance while also providing significant fuel cost savings. The system is flexible and can accommodate three different modes of operation. Switching between the modes is as easy as pushing a button.

The first mode, transit mode, operates when the main engines are powered off and unclutched. Propulsion is then provided hydraulically utilizing an auxiliary engine. Transit mode can achieve a maximum speed above 9 knots. In mode 2, or work mode, propulsion is provided hydromechanically, which allows for the most efficient combination of engine and hydraulic system operation. Work mode allows for a bollard pull of up to 60 metric tons. In the final mode, boost mode, the auxiliary engine power supplements additional hydraulic power through the AVD system, providing maximum available power and 70 metric tons in bollard pull, or over 13 knots in a maximum vessel speed. With improved response maneuverability and positioning, and a lower noise profile, the Advanced Variable Drive System represents the next step in optimized performance and efficiency.

Caterpillar Marine appreciates the opportunity to supply engines and the innovative AVD system to SANMAR’s newest tug and together with the local Cat dealer, will work to ensure continued service support.