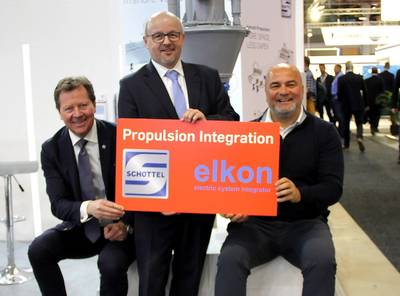 The contract for the purchase of the majority stake in elkon by the holding company SCHOTTEL Industries GmbH was signed in Istanbul, Turkey, and announced this week at the Nor-Shipping trade fair in Oslo, Norway.

“With elkon as renowned and very successful supplier of electrical power system engineering, design and integration for vessels, we will be able to [grow even stronger from a strategic point of view],” said Stefan Kaul, General Manager of SCHOTTEL GmbH. “We will expand our portfolio to include everything regarding generation, distribution, storage and management of electrical energy on board of vessels. SCHOTTEL becomes a complete system supplier for electrical and green propulsion.”

While both firms will continue to offer their usual independent services, Schottel said the companies eye potential expansion of both portfolios and the possible commissioning of turnkey solutions for propulsion systems and system integration.

“Both companies are among the competence leaders in their respective areas of influence – a position they have earned through decades of reliability and a keen focus on customer interests,” said Andreas Block, General Manager of SCHOTTEL Industries GmbH. “The focus is now on combining the competences in the long term and in letting them unfold in a financially strong environment, in order to ideally cover the future requirements.”

Ertuğ Yaşar, Managing Director at elkon: “In the past, SCHOTTEL and elkon have already been contracted independently of each other in projects on several occasions. They involved virtually every possible vessel type, from tugs and ferries to offshore vessels. Both companies thus play an important role in the customers’ decision-making process. In the longer term, they will benefit from each other and further develop, especially towards Green Propulsion.”

The move will also give elkon access to SCHOTTEL network comprising more than 170 service engineers as well as service locations in all of the world’s important shipping centers.

SCHOTTEL will take over the majority stake in elkon from the family investment house Vera Capital; the minority stake will remain with elkon’s senior engineers and management. elkon will become a legally independent subsidiary of SCHOTTEL Industries GmbH, a holding company which, in addition to SCHOTTEL GmbH, already includes companies of the automation and gearbox technology sectors.

The takeover is expected to take effect this spring, following a review by the antitrust authorities.