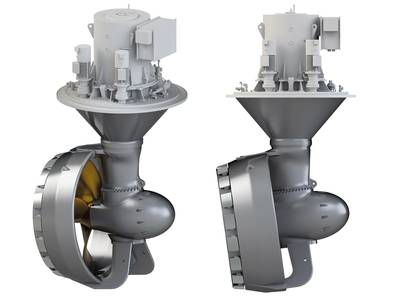 The company said that the rudder propeller has been developed to meet the growing requirements for W2W vessels to operate efficiently and reliably.

"The SRP-D (“Dynamic”) is a further improved variant for highly demanding DP operations in service operation vessels. When developing the SRP-D, extensive CFD simulations and calculations were taken into account," Schottel said.

Manfred Heer, VP Technology at SCHOTTEL: “With the SRP-D, we have significantly increased the DP performance of our rudder propellers, resulting in a product that meets the requirements of today’s offshore wind industry even better. Based on the proven principle of the SCHOTTEL RudderPropeller, a cost-efficient yet powerful solution has been developed that greatly improves the positional accuracy of the vessel for the special DP requirements of these applications. For customers, this means a significant increase in safety and possible operating times on offshore structures, especially in difficult weather conditions.”

According to Schottel, the new SRP-D variants are characterized by reduced propeller acceleration/deceleration times.

"In combination with a high-speed azimuth steering system with reinforced gear components, the SRP-D enables faster thrust allocation than conventional rudder propellers. Thanks to the shorter response times, it is possible to react faster and in a more targeted manner to external forces from wind, weather and currents, thus achieving a higher positional accuracy of the vessel. At the same time, fuel consumption is reduced," Schottel said.

"In addition, the SRP-D is marked by its extremely low profile, vertically integrated LE-Drive as well as an additional eight-degree tilt of the lower gearbox," the company added.

Also, per Schottel, despite its integrated design, the LE-Drive allows a free choice of motor for vessels with electric, ideally battery-supported energy supply. Due to its compact design, the LE-Drive opens up more freedom in vessel design. The SRP-D is optionally also available with drive train in Z-configuration.

Furthermore, thanks to the additional lower gearbox that has an eight degrees downward tilt, the interaction between propulsion unit and hull as well as the propeller flow interaction, are reduced. This results in increased thrust efficiency in DP operation and minimizes “forbidden zones."