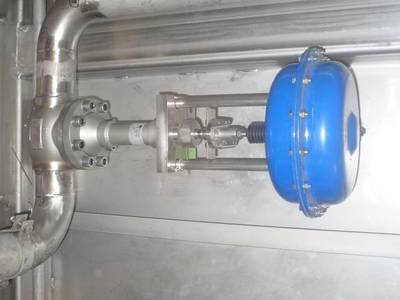 Parker Bestobell Marine, part of Parker Hannifin, has won a contract to supply cryogenic globe and check valves for two Caledonian MacBrayne Ferries (Calmac) being built at Ferguson Marine Engineering in Glasgow.
The valves will be installed in the liquid natural gas (LNG) fuel gas systems of these vessels, which are the first U.K. built ships that will run on this environmentally friendly fuel. The new ferries will be ‘dual-fuel’ vessels so they can operate on both LNG and marine diesel. LNG has been adopted by many ferry operators in Northern Europe in response to tighter emissions regulations.
The first of the new Calmac ferries is expected to be delivered in early 2018, with the second vessel following a few months later. The ships are designed to carry 127 cars or 16 HGVs (Heavy Goods Vehicles) or a combination of and up to 1,000 passengers.
Duncan Gaskin, Market Development Manager at Parker Bestobell Marine, said, “LNG is being much more widely adopted as an alternative fuel, due to tightening emissions legislation, which is driving the market towards more environmentally-friendly fuels. Our cryogenic valves are being widely specified for LNG fuel systems across the world, due to our expertise in this area.”
The new ferries are planned to operate on the Ardrossan-Brodick and the Uig Triangle routes in Scotland, although the final decision on vessel deployment is still to be made. The vessels they replace will be used on other routes.
Vessels using LNG fuel produce no nitrous oxides or sulphur oxides, which are strictly controlled in emission control areas (ECAs). They also do not release particulate matter, which causes respiratory problems for humans in heavily polluted cities and they emit 20 percent less carbon dioxide compared to standard oil based fuels. The greater use of LNG as a fuel for ships could dramatically cut the level of emissions from the world's shipping fleet, therefore improving air quality and slowing down global warming.
Parker Bestobell Marine has a track record of supplying its cryogenic globe and check valves for LNG fuel systems for ferries, including the Buquebus high speed ferry operating in South America and ferries built for STQ, Helgoland, Gotland Ferries and most recently for Balearia Ferries.
• Duncan Gaskin • fuel gas systems • fuel systems
Email