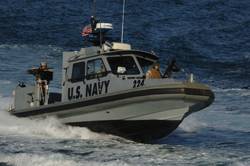 Military and industrial aluminum boat manufacturer SeaArk Marine, Inc. of Monticello, Arkansas said it will temporarily suspend acceptance of new boat orders until further notice. Due to very sporadic and extremely low (new construction) sales figures for nearly 24 straight months, the company announced that it would begin an overhead reduction plan in an attempt to “ride out” the effects of the current market until substantial improvement in the government & industrial marine sector appeared more apparent.
SeaArk Marine, Inc. is not completely shutting down its operations. The company currently has several boats on order that will continue in construction until those are completed and delivered with factory support and full warranty coverage. The company will also continue fulfilling spare parts orders indefinitely. New orders for repair/refurbish work with short turnaround cycles will continue to be accepted until January 1st, 2012.
“Obviously, this is a very emotional decision for everyone concerned” commented John McClendon, President and CEO of the company. “We have recently worked our way down to the minimum amount of fixed overhead we could and still properly serve the market that we compete in. Typical construction time for our products can be fairly long – up to a year or more for some of the larger vessels. This means that very small contracts and ones that continue to be stretched far apart have the potential to keep pushing cash consumption further and further out; eventually beyond financially sound limits.”
McClendon went on to disclose the logic behind the decision: “The situation is that SeaArk Marine, Inc. is currently in a positive cash position, no debt whatsoever, and has the ability to keep our employees and vendors paid rapidly. “
“We wanted to be able to continue that position and control those elements long before it became any sort of crisis to manage. Company ownership has struggled with this decision for some time, but this sales downturn is the most severe experienced in the company’s 52 year history, and despite our sales team’s monumental efforts, the increasing uncertainty of various opportunities developing recently created serious doubts that it will reverse significantly within the next year.”
“We would not accept a situation where we couldn’t live up to our obligations to our customers or our vendors.”
McClendon continued, “Financially this is clearly the best option and I would rather “hunker down” now under a well controlled plan - with the real possibility of coming back strong in the future - than to just keep rolling the dice that things are going to improve quickly enough to make remaining 100% operational right now a good business decision.”
SeaArk Marine, Inc. (formerly MonArk Boat Co.) has been in continuous operation in Monticello, AR since 1959. The company has delivered boats to all 50 states, every U.S. held territory, and over 70 countries around the world.
SeaArk Boats, the recreational aluminum boat builder also located in Monticello and operated by Robin McClendon (John McClendon’s sister) currently enjoys steady sales and is unaffected by SeaArk Marine’s decision. Each company serves distinctly different product markets with completely separate sales and distribution methods.
Zach McClendon, original founder of both companies, concluded the announcement with a reflective comment on the decision: “The current business environment in America seems to be getting more and more difficult by the day. Sometimes long term survival requires making extremely tough decisions. This was certainly the hardest we’ve ever had to make.”