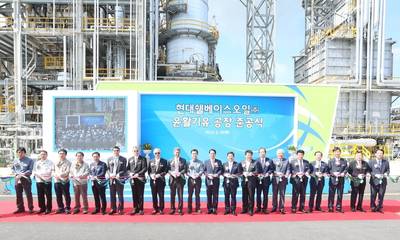 A joint venture company formed by Shell and Hyundai Oilbank, has inaugurated a new base oil manufacturing plant in Daesan, South Korea.

The plant has the capacity to produce approximately 13,000 barrels per day or 650 kilotonnes of API Group II base oils per year. (Base oils are the key component of finished lubricants, making up on average of 60-80% of the end product).

Mark Gainsborough, Executive Vice President for Shell Lubricants, said: “As the demand for higher quality lubricants is on the rise in Asia, the region is shifting away from Group I base oils towards increased use of Group II and Group III base oils. This plant contributes significant Group II base oil supply to Shell’s supply chain in the region, helping us grow our premium lubricants business in Asia, especially in China and Northeast Asia.”

The plant was built to capture the growing demand for Group II base oils in Asia. Construction was completed in a record 20 months, close to 2 months ahead of schedule and successful commercial production of base oils began in July 2014.