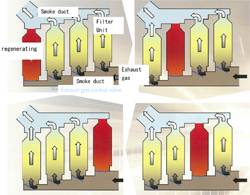 Mitsui O.S.K. Lines, Ltd. has started a demonstration test of the Diesel Particulate Filter (DPF) system installed on the diesel engine used for power generation on an MOL Group-operated ocean-going vessel. This is reported to be the world’s first application of the self-cleaning DPF on an ocean-going ship. With research support from Nippon Kaiji Kyokai (ClassNK), MOL and Akasaka Diesels Ltd. have jointly developed a DPF system for marine diesel engines, which run on C heavy oil. The initiative is part of ClassNK’s program to support joint research and development with industry and academia. MOL conducted a DPF demonstration test in 2010 using the main engine of a ferry serving coastal areas in Japan.
MOL is moving ahead with efforts to reduce air pollution as one of the environmental strategies in its midterm management plan GEAR UP! MOL. This technology is part of that, and the company continues to take a proactive stance in adoption of various technologies that reduce the environmental burden of its activities. This system incorporates a filter that relies on silicon carbide ceramic fibers. The filter collects particulate matter (PM) when exhaust gas goes through it. It can collect over 80% of PM produced by the engine, significantly reducing black smoke emissions. It is also a self-cleaning system that automatically combusts and eliminates PM buildup in the filter. This allows for continual operation without clogging of the filter, and requires no maintenance by seafarers. The test is scheduled for about one year (operating time: about 4,000 hours) to verify the system’s PM collection performance. After that, its durability will be assessed. The test started in November 2011, and the DPF system has already operated smoothly for over 500 hours.
• Mitsui O.S.K Lines Ltd. • Pollution Control • heavy oil
Email