Developments in marine power today are centered on ever tightening legislative mandate which increasingly aim to dramatically reduce and eventually eliminate greenhouse gas emissions to the environment. While the holy grail of being truly ‘emissions free’ is still not feasible, there is much concurrent work in industry and academia to develop and source the fuels, the machinery technology, the logistical infrastructure and the business case for solutions that will meet the 2050 50% emission reduction mandates from the International Maritime Organization (IMO). It’s a step process, and last month WinGD unveiled a new technology designed to slash methane emissions and cut fuel consumption in its X-DF dual-fuel engines via Intelligent Control by Exhaust Recycling (iCER), the first development to be introduced as part of X-DF2.0, WinGD’s second-generation dual-fuel engine platform.

While much of the recent progress and success in dramatically reducing emissions from commercial vessels has come in the small boat category – vessels with short, defined routes – progress on the big, two-stroke engines that power the world’s largest ships will take longer, as the technical and logistical hurdles are higher.

“I think it’s important to see the internal combustion engine as not a part of the problem but a part of the solution,” said Dominik Schneiter, Vice President, Research and Development, WinGD. “We see hybrids and electrification will be a big part of the steps toward 2050.” WinGD is active in a number of simultaneous studies on the optimization of large two-stroke engines, and Schneiter said that there needs to be a holistic view of not just the engine, but the entire power package, the entire engine room. He said that with a combination of existing and emerging technologies, from PTOs to batteries to smart management, “there is still possibility for 10 to 20% improvement in total propulsion system efficiency.” 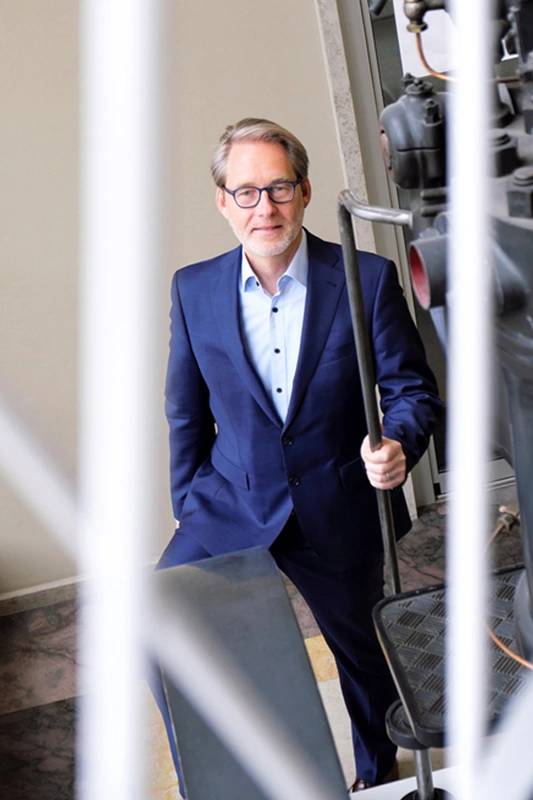 “Our next-generation X-DF2.0 technologies will prepare our engines for even better performance, both with LNG and with the future fuels to come.” Volkmar Galke, WinGD Global Director of Sales.X-DF2.0
WinGD’s X-DF2.0 technologies are designed to enable improved engine performance with both liquefied natural gas (LNG) and future carbon-neutral fuels, while the iCER system is designed to deliver enhanced combustion control through the use of inert gas. The result, according to WinGD, is a reduction in methane slip emissions of up to 50% when using LNG and a significant reduction of fuel consumption, of 3% in gas mode and 5% in diesel mode.

On the matter of methane slip reduction, Schneiter, explains, “What we can do is try to capture and burn the methane. With the iCER recirculation system we give the methane a second chance to burn; (with the iCER technology) we can nicely control the combustion in the cylinder.”

“Our next-generation X-DF2.0 technologies will prepare our engines for even better performance, both with LNG and with the future fuels to come,” said Volkmar Galke, WinGD Global Director of Sales.

The development builds on the WinGD X-DF platform, which at press time had logged 550,000 hours of operation premised on 60 engines operating in the field, and 320 engines sold all together.

Advancing the performance of dual-fuel engines comes neither quickly nor cheap, and this latest step has taken nearly five years from inception to delivery. “By adjusting the recirculation rate of inert gas and controlling parameters like fuel admission and ignition timing, we can increase compression ratios for greater efficiency,” said Galke. “The result is optimized combustion through closed-loop control regardless of ambient conditions and load.”

Like all future X-DF2.0 technologies, iCER will be available for all new X-DF engines. It is currently completing trials at one of WinGD’s dedicated test engine facilities – the final step in a two-year testing program. The company is also finalizing plans for a pilot installation.

The pilot installation is interesting as according to Galke the vessel is a small ship, under 2,000 TEU, designed without the iCER technology. The process to fit the equipment into a tight engine room space is proving valuable, as the retrofit market is a target for the iCER tech.

As well as using fossil LNG, X-DF engines can also burn carbon-neutral synthetic or bio-derived LNG when it becomes available. According to Schneiter, while much of the ‘fuel of the future’ chatter centers on fuels derived from renewable sources, fuels from biomass should not be forgotten, particularly with the supply and demand challenges in creating an delivering renewable created marine fuels in the volume needed to fuel the world fleet of ships.

X-DF2.0: Lessons Learned
As with any new technology development, there are glitches, hurdles low and high to traverse in the delivery to market, and the X-DF2.0 is no exception.

“The industry was skeptical about the low pressure on the two stroke engines – citing knocking and combustion problems,” said Volkmar Galke, WinGD Global Director of Sales. “Luckily (all of the issues encountered to date) have been technical problems that are able to be solved, and not concept problems. So the biggest learning here is that the combustion process is stable and we have it completely under control.”

According to Dominik Schneiter, VP, R&D, WinGD, the X-DF platform is unique due to the very high percentage – from 95% to 98% – that the engines have run fueled by LNG. “The high utilization of the gas system on these engines is really unique. They really just switch to diesel fuel when they have to, according to the International Code of Safety for Ships using Gases or other Low flashpoint Fuels (IGF Code), which is for maneuvering, and once a week to ensure that the fluid injection system is not blocked.”

He said that one of the biggest lessons learned with the engines operating predominately on LNG is centered on the cylinder lubrication oil deposit build ups, particularly when shipowners are using high BN numbers. Schneiter said it was learned in CIMAC working groups that “cylinder lubrication oil developed for HFO [heavy fuel oil] and MDO [marine diesel oil] applications are not necessarily the best oil for LNG applications. This is being addressed with the oil industry.”