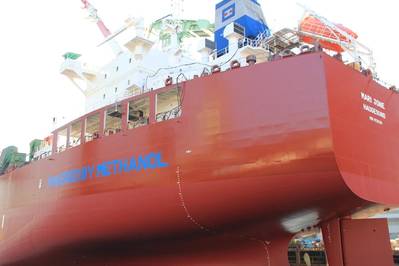 Marinvest, the Swedish ship-management company, has announced that its ‘Mari Jone’ and ‘Mari Boyle’, two of the first vessels powered by dual-fuel ME-LGI (-Liquid Gas Injection Methanol) engines operating on methanol, have each passed 10,000 operating hours on the alternative fuel.

Additionally, the company reports that its combined ME-LGI-powered fleet has passed a cumulative total of 50,000 operating hours on methanol.

The two methanol tankers are managed on timecharters for Waterfront Shipping and operate globally, providing an uninterrupted flow of methanol between storage terminals and customer plants.

René Sejer Laursen – Sales & Promotion Manager, MAN Energy Solutions – said: “When introducing methanol as a two-stroke marine fuel, we encountered the usual teething problems, including addressing the liner lubrication because of methanol’s potentially corrosive behavior. However, the service experience gathered after 50,000 hours of cumulative operation has ironed all such problems out and the ME-LGI engines are now running smoothly with no maintenance issues. In fact, they are even showing an improvement in fuel efficiency.”