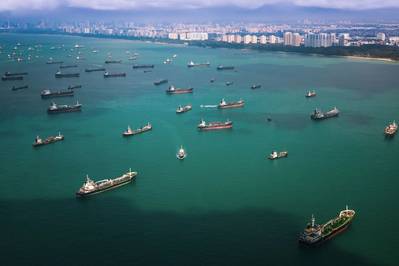 The Singapore fuel oil market has rallied this week as inventories have dropped at the same time that some supplies in the region do not meet the standards for use as shipping fuel, further reducing the amount of supply available, five trade sources said.

The sources said the supply tightness stems from too much of the supply of bunker fuel being so-called off-specification, meaning that it does not meet the standards for use on ships. Singapore is the world's biggest bunker fuel market.

Three of the sources said there were problems with the amount of metals and concerns about the flashpoint, or the temperature at which vapours of the fuel oil will ignite, of some of the bunker supply, which impacts the ability to store the fuel onboard a vessel.

"The market strength in the prompt is due to bunker off-specification issues," said one of the sources, a Singapore-based fuel oil trader, which forced shippers to reject some cargoes and seek alternatives.

One source said the quality problems may originate from blending fuel onboard ships, where the blending process cannot be done as well as at large and specialised onshore facilities.

The traders declined to be identified as they are not authorised to speak to the media.

The quality of the bunker fuel could be improved by blending it with higher-quality fuel in onshore tanks.

However, the amount of fuel oil stored in tanks to blend with has declined as there is no incentive to store fuel because the market is in backwardation, when prices for future delivery are lower than those for immediate dispatch.

Landed physical fuel oil storage leased out in Singapore, the world's largest bunker market, fell by an estimated 30 percent over the past 12 to 18 months, said Mike Beviss, director of special projects at Eastport Maritime, a consultancy.

Singapore onshore fuel oil inventories fell to a more than 10-month low of 17.941 million barrels in the week to April 18, the latest official data showed.

Adding to the shortage of quality cargoes is rising demand ahead of the high consumption summer period in the Northern Hemisphere.

"Regional demand has swung big time too, with the Gulf, India and South Korea pulling instead of pushing," said a second fuel oil trading source.