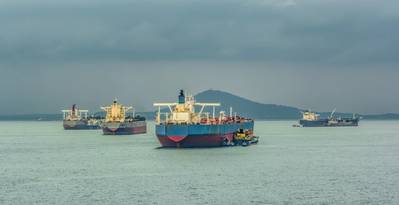 The Maritime and Port Authority of Singapore, which oversees the world's biggest marine refuelling hub, said it is investigating the suspected contamination of bunker fuel supplied to several ships in the port and had ordered supply of the batch to be halted.

"We detected contamination in 34 fuel samples and we are aware of 14 vessels that have suffered damages. As VPS has 50% market share of global marine fuel analysis, then we can assume there may be more vessels affected, who do not test with VPS," the fuel and oil testing firm said in an email to Reuters on Monday.

"Hopefully, we have notified the affected vessels within their contractual time-bar, to allow them to at least place the suppliers on notice," VPS added, saying the company would prefer not to share the identity of the suppliers.

The Singapore port authority said it was notified of the issue on March 14 and immediately contacted bunker suppliers to stop supplying the relevant batch of fuel, and to inform all ships supplied with the fuel to exercise caution when using it, according to an emailed statement late on Sunday.

"As a major bunkering hub, the Maritime and Port Authority of Singapore (MPA) takes quality assurance seriously and is investigating the cause of the alleged bunker fuel contamination," it said.

"Further investigations are currently on-going. MPA will not hesitate to take action should there be any non-compliance."

MPA did not name the suppliers. VPS had said that 34 vessels were identified as having received HSFO deliveries over the last two months that were contaminated with up to 2,000 parts per million (ppm) of chlorinated hydrocarbons.

Simon Neo, head of marine fuels consultancy SDE International Pte Ltd, said it was possible that contamination occurred in the blending process, while only a limited group of users appeared to be affected.

"All fuel oil in Singapore – be it high sulphur, or low sulphur – are all blended," Neo said, noting that the delivered HSFO met standard specifications.

"It's affecting a couple of players only, but the rest of the suppliers so far haven't got any of it," he added.

Norwegian-headquartered ship insurer Skuld said on Friday that over the past two weeks it had seen an increased number of claims related to high-sulphur fuel oil loads at Singapore, which were found to be contaminated with chlorinated compounds.

"In some cases, the vessels even required a tow to port," Gard said.

Emissions reductions have been confirmed for the first laker to feature a diesel-electric drive train, after the initial…

NYK Line, IHI Power Systems Co., Ltd., and ClassNK signed a memorandum of understanding (MoU) with City of Yokohama for the…