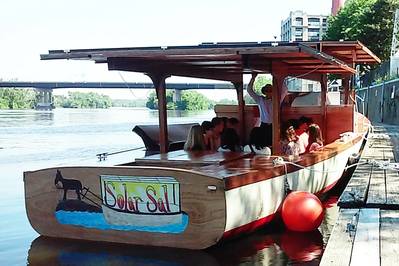 Solar Sal traversed 72 locks and traveled a total of 650 miles across the state of New York, delivering four tons of cargo from Lockport to a paper mill in Mechanicville on its history-making journey. The vessel runs 8.3 mph on twin Torqeedo Cruise 4.0 electric motors. Providing the equivalent thrust of two 9.9 horsepower combustion engines, these powerful, emission-free electric motors run on sunlight.

Torqeedo, the manufacturer of the boat’s electric propulsion, said it has seen more workboats choose electric propulsion – whether plug-in, hybrid or solar charged – due to its power, efficiency at moving heavy loads and cost savings.

When Solar Sal's builder, David Borton, decided to build a useful and practical solar electric boat, he relied on his background as an adjunct associate professor of mechanical engineering to design a 40-foot wooden, strip-built hull with maximum surface area for solar collection. It can be fitted as a 12-ton cargo ship, dayliner tourist vessel or cabin cruiser, all using nothing but free, clean solar fuel.

“The best part of these motors is their efficiency. That includes the electronic control, good motor, planetary gear reduction and efficient, slow, large propeller,” Borton said.

Borton also has a personal target of building 10 solar electric boats a year.

Solar Sal can motor all day in daylight and up to 50 miles after sunset on stored battery power. It's fitted with 5 kW of solar panels, serving two battery banks. One powers a bank of Torqeedo's Power 26-104 lithium batteries, the other powers conventional lead-acid batteries. Borton hopes the side-by-side comparisons of the storage technologies will provide some interesting data in the future.

Christened Solar Sal, this craft is named for the song, “Fifteen Miles on the Erie Canal”, which memorializes Sal, one of the mules that towed the barges that brought economic prosperity to New York in the mid- to late-1800s.

The vessel will visit local festivals and alternative energy conferences all through the year.