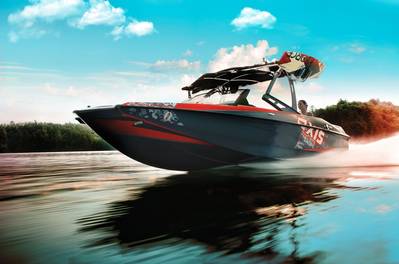 This special edition was inspired by team rider Keith Lyman, who decided to leave professional wakeboarding to serve in the Army last year. A portion of the proceeds from each RECON edition boat will directly benefit Jared Allen's Homes for Wounded Warriors.

Both the popular A20 and A22 boats will be fitted with the RECON package in 2013, which includes digital camouflage graphics and vinyl accents, a RECON gel coat scheme, charcoal tower, and branded steering wheel, swim pad and carpet.

"We were moved by Keith's decision and wanted to recognize and appreciate all the troops who are defending our freedom on a daily basis," said Adam McCall, vice president of product for Malibu Boats.

Lyman retired from his ten-year wakeboarding career at age 27 and joined the military after admiring service members for most of his life. Axis Wake Research was impressed with Lyman's decision to give up a successful professional wakeboarding career to serve the country and decided to honor him, and all other servicemen and women, with the RECON edition.

Axis, a fast-growing towboat in the industry, has had success with special editions including the existing Vandall model. The RECON package will be a highlight of its 2013 product line.