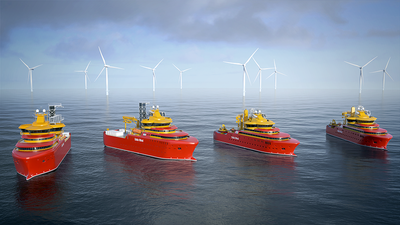 Voith reports it will deliver eight electric Voith Schneider Propellers (eVSP) to the Norwegian shipping company Østensjø, for four offshore wind service operation vessels (SOV) that are being built at the Astilleros Gondán shipyard in Spain for delivery from 2022.

The newbuilds will be equipped with battery hybrid propulsion systems that will enable the future use of CO2-neutral hydrogen technology, and the new, all-electric Voith Schneider Propeller further supports the shipping company in achieving its emissions targets.

According to Voith advantages of the new eVSP include high efficiency and reduced complexity, as the permanent-magnet synchronous motor is already integrated in the propeller. Furthermore, good maneuvering performance is especially beneficial for use in the offshore wind industry. Accurate dynamic positioning (DP) even under harsh environmental conditions, very fast starting and leaving of the wind turbines, and a safe and quick transfer in the offshore wind farm are critical factors for smooth operation.

Comparative calculations have shown that a VSP-driven ship can maneuver safely at significantly higher wave heights, thus offering the operator an economic advantage, Voith claims. Due to the very fast and accurate thrust adjustment, the VSP can reduce the rolling motions of the ship by up to 70%, both when the ship is moving and when it is stationary at the wind turbine, the manufacturer adds.

The eVSP are also characterized by very high efficiency and are optimally integrated into the ship's design. In model tests with ducted screw propellers, an average advantage of 15% for the eVSP was measured with regard to power requirements in transit. The electric version of the VSP is also characterized by lower fuel consumption in dynamic positioning, because it acts very quickly against disturbing wind, wave and flow forces.