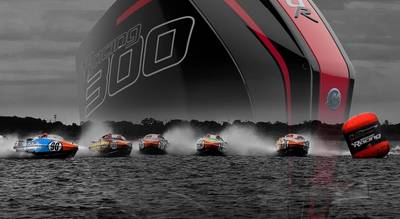 P1 SuperStock, presented by Mercury Racing, is a one-design, single-engine race series. The new 300R will replace Racing’s 300XS as the exclusive power for the series for both domestic and international venues.

The stout V-8 powerhead provides an astounding 44 percent increase in displacement compared to the legacy two-stroke 300XS. That, combined with four valves per cylinder and the DOHC valve train, enables the new four-stroke to generate unprecedented torque and unmatched acceleration from the lower end of the power band up to maximum engine speed. All of this on 87-octane (90 RON) pump fuel while maintaining a comparable weight as its two-stroke predecessor. The weight savings can be attributed to state-of-the-art powerhead components, including composite intake runners.

The surface piercing Sport Master, designed for boats capable of speeds in excess of 85 mph, features low-water pick-ups and a crescent leading-edge for maximized efficiency and speed. All boats are equipped with hand-crafted Mercury Racing Rev 4 XP propellers for precision matched race competition.

The 300R is backed by a three-year factory warranty with up to three years of Mercury Product Protection for a possible six years of warranty when used in recreational boating applications.

P1 SuperStock CEO Azam Rangoonwala said, “The P1 Panther race boat is at the heart of our SuperStock championship and strategic partnerships are an integral part of our business model, so the relationship with Mercury Racing is hugely valued. Embracing the latest technology by upgrading to the 300R outboard will not only increase racing performance but also maintain parity within the series.”