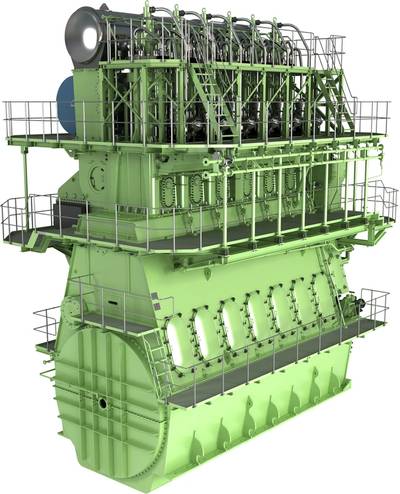 The MAN B&W G60ME-C engine will satisfy IMO environmental standards as well as the shipowners' demand for fuel efficiency.

STX Offshore & Shipbuilding announced on April 8, 2013 that it had signed a contract to build four 113,000-dwt Long Range 2 (LR2) product tankers for Teekay Tankers Ltd. (Teekay Tankers), with an option for up to an additional 12 vessels. Each newbuilding will be powered by an MAN B&W G60ME-C engine and will satisfy IMO environmental standards as well as the shipowners' demand for fuel efficiency. The four confirmed vessels will be constructed at Jinhae shipyard in Changwon, South Korea, with delivery scheduled from the second half of 2015.

MAN Diesel & Turbo reports having close to 200 G-type engines on order, spread over a broad spectrum of applications, and states that it has the fastest market acceptance any engine series in the MAN B&W portfolio has ever received.
Reducing Fuel Consumption

With bunker prices having increased by over 500% since 1999, a rise that is set to continue, as well as the impending arrival of even stricter environmental legislation, the adoption of the G-type as prime mover for its tankers is a deliberate move by Teekay Tankers. "With their fuel-efficient design, which is estimated to result in 20 to 30 percent fuel savings compared to current vessels in the existing LR2 fleet, we believe these newbuildings will be very attractive to our customers,” comment Bruce Chan, Teekay Tankers' Chief Executive Officer.

The G-type program
MAN Diesel & Turbo’s G-type programme entered the market in October 2010 with the entry of the G80ME-C9 model. The company subsequently expanded the ultra-long-stroke programme in May 2011 with the addition of G70ME-C9, G60ME-C9, G50ME-B9, G45ME-B9 and G40ME-B9 models. The G-types have designs that follow the principles of the large-bore, Mark 9 engine series that MAN Diesel & Turbo introduced in 2006. Their longer stroke reduces engine speed, thereby paving the way for ship designs with unprecedented high-efficiency.

G-type efficiency
The G80’s longer stroke results in a lower rpm for the engine driving the propeller: a reduction from 78 rpm for the S80 engine to 68 rpm for the G80. This lower optimum engine speed allows the use of a larger propeller and is, ultimately, significantly more efficient in terms of engine propulsion. Together with an optimised engine design, this reduces fuel consumption and reduces CO2 emissions.