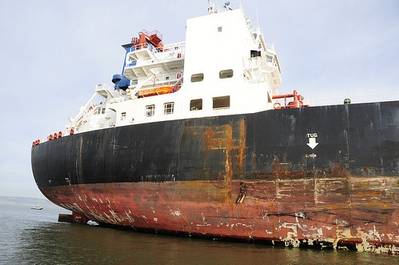 The Coast Guard is investigating the incident where the tankshilp reported to the USCG it had allided with Tower Six of the bridge.

The 752-foot Marshall Island’s-registered tanker Overseas Reymar reported to the Coast Guard at approximately 11:20 a.m. that it had allided with tower six of the Bay Bridge in the San Francisco Bay. The vessel was immediately directed to an anchorage area just west of Alcatraz Island by the Coast Guard Captain of the Port. The vessel was in ballast at the time of the incident.

There were no reports of injuries and no reports of pollution. As a precautionary measure, the Coast Guard Captain of the Port of San Francisco ordered pollution-control boom to be staged.

The Coast Guard and other agencies immediately dispatched response assets to the scene, which included Coast Guard response boats, a cutter, and helicopter as well as additional resources from other federal, state, and local agencies. Coast Guard pollution response personnel, investigators and vessel inspectors were also deployed to check for any signs of pollution to begin an investigation into the incident and determine the ship’s structural integrity.

The double-hulled ship sustained damage to its starboard quarter.

Immediately following the report of the allision, the California Department of Transportation sent a structural maintenance team to investigate the bridge and found no structural or foundation damage. Caltrans is continuing to inspect the bridge and the bridge fender system damaged in the incident and will develop a plan for repairs. Vehicle traffic over the bridge was never impacted.

The Overseas Reymar is owned by OSG Ship Management, U.K. and was headed outbound to sea at the time of the incident.