An upgrade by Kongsberg Maritime of the waterjets on a catamaran ferry operated by the family-run firm of AG EMS brings a new level of efficiency and environmental consideration to a route traversed by the company for 143 years.

Claus Hirsch, the fleet manager with AG EMS, is a likable and personable individual. His easy demeanor suggests that he is contented with his lot in life, and no one would blame him for that. The company he works for is a family-run concern with a benevolent attitude towards its employees and a palpable respect for the precious environmental features in its operational base of Lower Saxony, Germany; an area teeming with UNESCO World Heritage sites.

With its headquarters in the historic seaport of Emden, AG EMS has been operating a ferry service to and from the beautiful island of Borkum for the last 143 years. In addition to this, the company’s benign stewardship manifests itself all over the island, with hotels, electric buses, trains and light aircraft all operating under the AG EMS umbrella. “We always keep an open mind,” Claus remarks, “and we are always looking for new business opportunities. Nevertheless, we’re a small and tight-knit company, and we look out for each other in every venture. Our CEO always says, ‘everybody is responsible for everybody else’ – and if I want to ask them something, I only have to walk up three flights of stairs to do so.”
However enviable this combination of civilized working conditions in an idyllic location may sound, it’s as well to remember that AG EMS has been buffeted by circumstance just like the rest of us over the last two years. It’s perhaps a measure of the firm’s policy of far-sightedness rather than short-term gain that it was still quietly making prudent investments and notching up success stories even in the midst of the pandemic. One such story concerns the replacement of the waterjets on its 40m passenger ferry M/S Nordlicht – an upgrade which brought about a remarkable 26% improvement in energy efficiency. 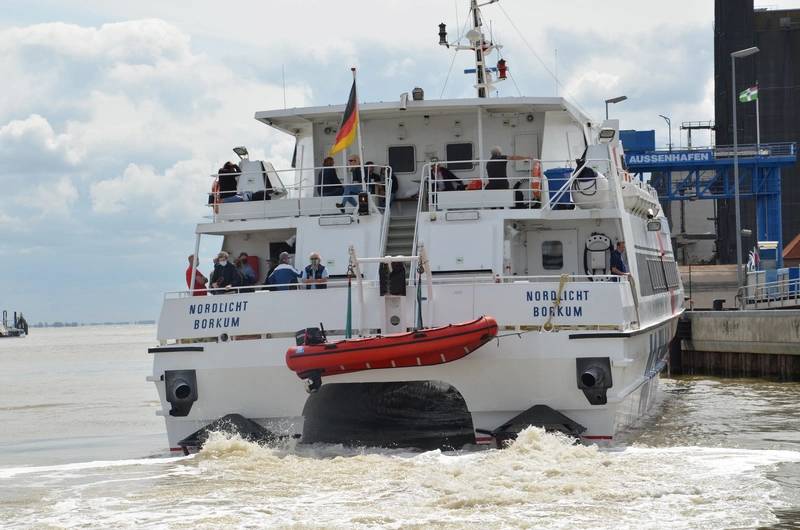 Nordlicht, a 38.8m catamaran built in 1989 and capable of carrying 272 passengers, had been using a pair of Kamewa SII waterjets for years, but when one of the jets sustained major damage, AG EMS was faced with a dilemma. “These things always seem to happen at the height of the season,” Claus laughs, “never in the wintertime! So we had two options: one was to repair the old SII version, taking on board the lead time and expenditure of sourcing all the necessary spare parts, or to change the complete system to the next-generation Kongsberg Maritime Kamewa S-4 waterjets.”

The lead times for repair or replacement were almost identical, so there was no discernible advantage in that respect to remaining with the existing arrangement. More than that, however, was the realization that no progress would be made by merely repairing the damaged SII. “We wouldn’t have had any better outcome later on; we’d still be looking at the same operational status,” Claus said. “So in that moment, it was a case of weighing up whether to invest €150,000 to stick with our old system, or spend more money but improve literally everything? We did discuss it at length; but the answer was always obvious.”

The type S-4 Kongsberg Maritime Kamewa waterjet boasts a radically improved steering and reversing unit. Building upon the proven technology of the SII, it combines an increased working life expectancy of 10 years with a 15-20% reduction in weight, 20% fewer parts in the waterjet unit and a substantial decrease in CO2 emissions. Conveniently, the hydraulic cylinders and hydraulic hoses are located inboard; a development that has been very gratefully received by the AG EMS engineers, as Claus explains. “Everything used to be located outside the cockpit, in the water: you had to carry out repairs in wintertime on the ice. And then you’d have the feedback cable getting crushed in the ice, so you’d have no steering anymore. It was terrible.”

Claus points out that the inboard placement of these components also greatly reduces the risk of oil spills. “Even if the hydraulic hoses are broken or damaged, the oil is contained inside the jet room where you can clean it up and continue with your repairs. You don’t have to go outside, onto the water, where everything is wet, dangerous and slippery. It’s all so much easier and safer now for our ship engineers.” 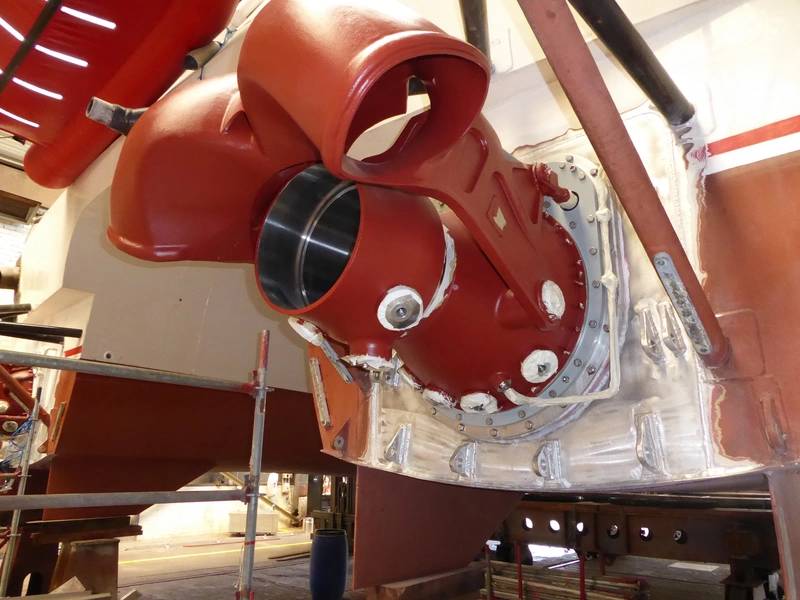 Kongsberg’s own figures suggest that upgrading from SII to S-4 waterjets will improve a vessel’s acceleration by 15%, its propulsive efficiency by 7%, and its steering and reversing manoeuvrability by 25%, equating to a reduction in total fuel consumption of approximately 25%. Calculations of this kind are all very well in abstract terms, but customers investing in a pair of new S-4s can be forgiven for requiring hard proof. In the case of AG EMS and Nordlicht, this involved taking a series of comprehensive performance measurements both before and after installation of the waterjets – a procedure which Claus characterises as straightforward. “You cut out the aft plate and insert the new adaptor plate, and the inner ring of the old waterjet fits the new one, so it’s an easy process.” It’s worth pointing out that swapping out the old units and replacing them with S-4 waterjets was accomplished remarkably quickly, in fewer than 10 days.

Following the stringent before-and-after tests conducted along Nordlicht’s regular route between Emden and Borkum, the results were as decisive as everyone had hoped. It was found that the passenger catamaran’s speed had increased from 30 to 32.6 knots while still only consuming the same amount of energy as before. The extra speed is a godsend in situations where, for example, passengers require more transit time between the train station and the ferry terminal.

“Being able to travel more rapidly if passengers need to make train connections is a choice we’ve never had before,” Claus says. “With the new European passenger rights, you have to make special compensations for any delays. If it’s half an hour, you have to give everybody coffee! If it’s an hour, you have to pay an extra surcharge for more than it would cost to pay for putting passengers up in a hotel, so everything is a clear risk for us if we fail to deliver. It’s obviously better for everyone if we’re running to schedule.”

The economic benefits conferred by the S-4 upgrade are also considerable. “We actually calculated that there has been a 26% improvement in energy efficiency – or, looked at another way, a 26% reduction in fuel consumption – when operating at the same speed achievable with the SII waterjets,” Claus adds. “It’s a very nice story that I could go to my CEO and say, ‘we did the right thing’. He was already satisfied, but now he gets this 26% improvement: perfect.”

Meanwhile, the claimed 15% improvement in acceleration was borne out when the S-4s were found to have helped Nordlicht reach a speed of 25 knots in 39 seconds, as against 46 seconds with the SII waterjets.

Separate calculations for speeds between 0-25-0 knots, which come under the classification of harbor maneuvering, also showed an efficiency gain of approximately 25%. The fact that S-4 waterjets feature a completely different alignment from their predecessors is a key factor in this outcome, as Claus acknowledges. “The captain has to learn to drive the ship in a totally new way,” he laughs, “because the steering handles work the other way from previously. Especially astern. But the interesting thing is that today, nobody misses the old system because we get far better performance from the new waterjets.”

Having spent a decade as an engineer with AG EMS before occupying his current role as fleet manager for a further 10 years, Claus is adamant that the new steering arrangement is the reason for this marked improvement. “With the SII, the complete bucket [assembly] was steering all the time. It’s a massive piece of steel, so you’d have to pay out quite often for replacement bearings and hydraulics because everything was working so hard to get this big bucket from starboard to port all the time. With the S-4, you just have a small nozzle which steers with a single cylinder.”
From Kongsberg’s perspective, the replacement of the waterjets neatly upholds and epitomizes several of the company’s core principles: technical innovation, cost-effectiveness, the green agenda and impeccable customer service. “Nordlicht may be more than 30 years old, but it’s a nicely built and very well-maintained vessel, so it was obvious that AG EMS would want to continue running it for several more years,” adds Kai Lindenberg, Aftermarket Sales Manager at Kongsberg in Germany. “I’ve been in contact with Claus for a long time, and when it came to Nordlicht’s waterjets, AG EMS was initially looking at a full repair of the old units; a sizeable investment, but one without any discernible long-term benefit. It’s important to reflect upon and react to customers’ needs, so after some discussion we easily arrived at a far more sustainable and sensible solution. Together with Jan Wall, Aftermarket Sales and Product Specialist in Sweden, we were able to present a perfect case study, with huge and valued support from AG EMS.”

With its LNG ferries, electric buses and a planned solar roof for AG EMS’ parking facility that would generate sufficient electrical power for its headquarters and real estate, the company wears its environmental credentials with pride. For Claus, there’s no argument that a green agenda makes sense on every level. “When we changed from SII to S-4 waterjets, that epitomized an operational improvement which simultaneously saves money and is kinder to marine ecosystems. It puts us on the right side ethically and commercially; and it befits companies like ourselves to look to the future and consider what the next generation is asking for. The S-4 waterjets are typical of Kongsberg products in their robust design and the flawless performance they have delivered in their first year of operation; and it doesn’t seem unreasonable to suggest that we could still be running Nordlicht for another 30 years.” 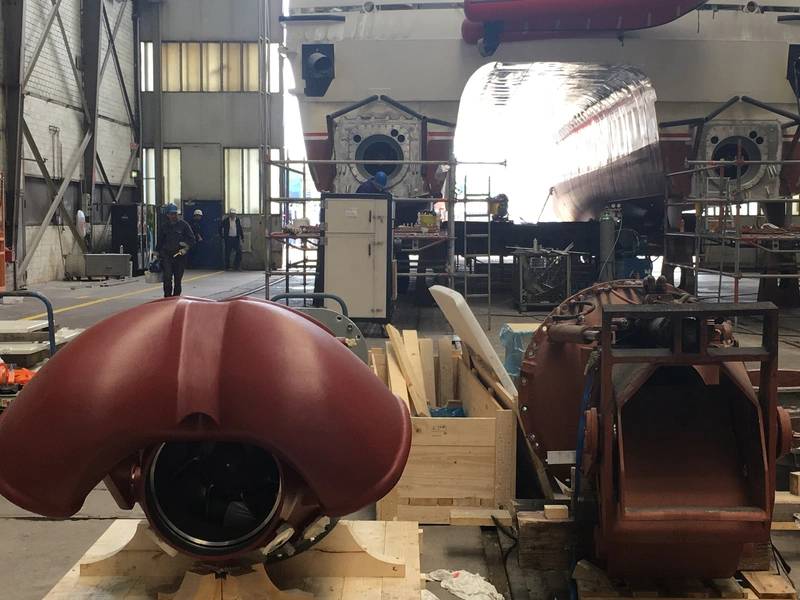 Nordlicht old (right) versus new (left), the 'dinosaur' and the 'beauty'.

The largest U.S.-flagged, self propelled trailing suction hopper dredger (THSD) Frederick Paup will be propelled by a trio…

The Northern Lighthouse Board (NLB), the General Lighthouse Authority for Scotland and the Isle of Man announced the award…