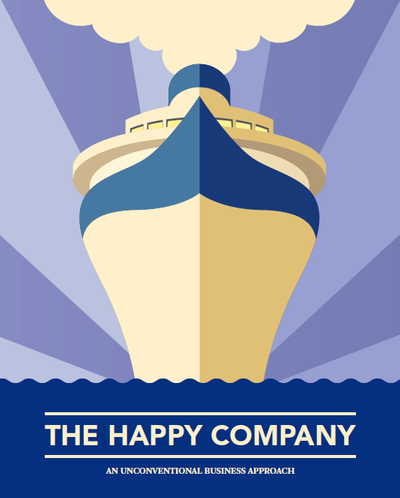 The Happy Company is a book about the love for shipping, the no nonsense mentality that defines this branch and the way Netherlands-based AEGIR-Marine became a major player in a market dominated by multinationals.
Muis explained, “It’s not rocket science what we do. The main difference is that we continuously really try to put ourselves in the customer’s shoe. We think about the kind of service we like to get and give that to our customers. We are proactive, think in solutions and are there when they need us. That’s all.”
The cause for this book is AEGIR’s 15-years anniversary, but it’s not more than a cause. “We’ve been thinking about writing this book before, but since it’s not our core-business we never did,” said Martin Visser, codirector at AEGIR-Marine. “Thinking about our anniversary we picked up this idea again. We didn’t want it to be a management book, nor a traditional jubilee book with anecdotes and old pictures. It had to be different.”
The result is a book which uses a ship as a metaphor for a company. The philosophy has been put on transparencies that lay over the day-to-day practice. Photos and job examples illustrate AEGIR’s daily work. Comments are not left out, simply because growing as a company reflects on the staff, the company and the customers.
“Of course we are proud of what we have accomplished,” said Hans Dekker, director and founder of AEGIR-Marine, “but we didn’t want it to be a hallelujah-story. Open and transparent is one of our key values. We mainly wanted the book to reflect where we stand today.”
In the 15 years of its existence, AEGIR-Marine has developed its role as a player in the international marine industry. As an independent manufacturer, AEGIR-Marine produces stern tube seals, bearings and shaft seals that are suitable for all major propulsion systems. Today, AEGIR-Marine PRIME Parts is a class approved make. However, according to AEGIR-Marine, its main focus is and always has been worldwide service for stern seals and propulsion systems.
• Netherlands • propulsion systems
Email