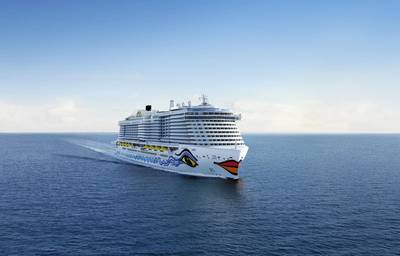 The number of liquefied natural gas (LNG) powered ships on order for AIDA Cruises has risen to three following the latest shipbuilding contract announced today by the German cruise line’s parent company Carnival Corporation & plc.
Carnival said it signed a shipbuilding contract with German shipbuilder Meyer Werft GmbH to build another new 180,000-ton ship that will be fully powered at sea and in port by LNG. The vessel will be built at Meyer Werft’s Papenburg shipyard for delivery in 2023. By that time, more than half of AIDA Cruises’ ships will run fully or partially on LNG.
With today’s announcement, AIDA Cruises now has a total of three LNG ships on order. The first in the series, AIDAnova, is scheduled to join AIDA’s fleet in December as the first cruise ship in the world to be fully powered by LNG. The series’ second ship will be christened in the spring of 2021.
The three ships in the new class will each feature roughly 2,700 staterooms with a choice of more than 20 different cabin types, more than 40 restaurants and bars, an enhanced theatrium and a TV studio.
“The interest in AIDAnova, the first ship of our new generation, is enormous, even before the commissioning later this year,” said Felix Eichhorn, president of AIDA Cruises. “With today's new shipbuilding contract, we will ensure the further growth of the cruise market in the long term and will be able to provide excellent cruises for this steadily growing holiday segment in the future as well.”
Tim Meyer, managing director of Meyer Werft, said, “This is the 10th AIDA Cruises ship we are building in Papenburg, emphasizing a long-term partnership between AIDA Cruises and Meyer Werft. AIDAnova and the following two sister ships feature the latest technology focused on sustainability and energy efficiency.”
AIDA Cruises’ three new LNG powered ships are part of Carnival Corporation's fleet expansion plans which presently includes 20 new ships scheduled for delivery by the end of 2023.
In total, Carnival has agreements in place with Meyer Werft and Finnish shipbuilder Meyer Turku to build nine LNG-powered cruise ships across four of its nine global cruise brands. In addition to the three new vessels for AIDA, Carnival has two new LNG ships expected to be delivered to Costa Cruises in 2019 and 2021, two for P&O Cruises UK expected in 2020 and 2022 and two for Carnival Cruise Line in 2020 and 2022.
• liquefied natural gas • Meyer Turku • Meyer Werft GmbH
Email