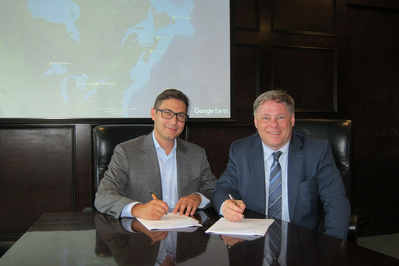 The agreement will create an action plan in which a specialist team, comprised of Heddle Marine and Thordon Bearings’ personnel, to offer support to ship managers and owners looking to ensure their vessels are fully compliant with environmental legislation prohibiting the discharge of oil from the oil-to-sea interface of ships' propeller shafts. Shipowners could face substantial financial penalties if their vessels are found to be incompliant.

Leaking shaft seals are known to be a significant contributor to on-going pollution at sea. The use of biodegradable lubricants, which are an improvement over mineral oils, are still an extremely expensive option for shipowners and some are having seal compatibility issues. Even biodegradable lubricants still need to be reported to authorities when discharges occur.  Thordon provides a solution that uses seawater as the lubricant that meets all regulations, eliminating any risk of oil pollution.

Under the terms of the agreement, Thordon Bearings will also provide equipment, training and guidance to Heddle Marine personnel and support the yard in carrying out propeller shaft conversion projects to the "highest standards and in the most efficient and cost effective manner."