Thordon Bearings Reports it has secured a contract to supply a range of water-lubricated and grease-free bearings for installation to several fleet boats under construction at the FMT Shipyard & Repair facility, for workboat owner Maritime Partners.

Founded in 2015, Maritime Partners owns a fleet of 1,600 inland river vessels operated under bareboat charter. The new vessels, however, will be the company’s first newbuilds to feature a complete portfolio of Thordon technology following the success of individual installations aboard existing tonnage.

Maritime Partners’ co-founder and president, Austin Sperry, a direct descendent of gyrocompass inventor Elmer Sperry, said, “As a leading provider of maritime assets and a founding member of the BlueSky Maritime Coalition, we have a commitment to and a responsibility for environmentally-sustainable maritime operations. The application of technical solutions that deliver absolutely zero environmental risk is a no-brainer for us.”

David DiSalvo, the owner of DiSalvo Marine, the independent contractor for Thordon Bearings that secured the deal, said, “We went through the specification and Austin said he wanted everything Thordon had. He wrote, “Thordon” alongside the rudder bearings, the shaft bearings, the steering bushings and the seals. Every time we got to a component that Thordon produced, he scratched out what was already in the spec and wrote Thordon.”

DiSalvo said, “Maritime Partners has optimized its boat charter business by opting for two different engine packages on these new fleet boats. Both engine options meet the latest U.S. EPA requirements. As a result, the new Entech-designed boats utilize the maximum horsepower rating without having to use Tier IV engines with exhaust after-treatment systems, which benefits charterers as it reduces operating costs.

“Now with the addition of the Thordon products, the company has upped their game with environmentally friendly vessels that will offer longevity and low maintenance that its customers will also value for many years.”

'Meeting of the minds'
While environmental considerations and the reduced OPEX associated with Thordon equipment were obvious deal makers, the determining factor came when Sperry met Thordon Bearings’ Founder and Innovator and discovered he was a recipient of the award given in the name of his great, great grandfather.

In 2019, George (Sandy) Thomson was presented with the Elmer. A. Sperry Award for Advancing the Art of Transportation, one of the highest accolades given for an individual’s contribution to transportation engineering.

Thordon Bearings’ Territory Sales Manager, Jim Bright, said: “It is fantastic to see this real, physical connection between the maritime industry, Elmer Sperry and the spirit of the award. When Austin met Sandy, it was a meeting of minds. They share the same environmental vision. They both recognize the role maritime industries have to play in finding tangible, meaningful solutions to the climate change problem.” 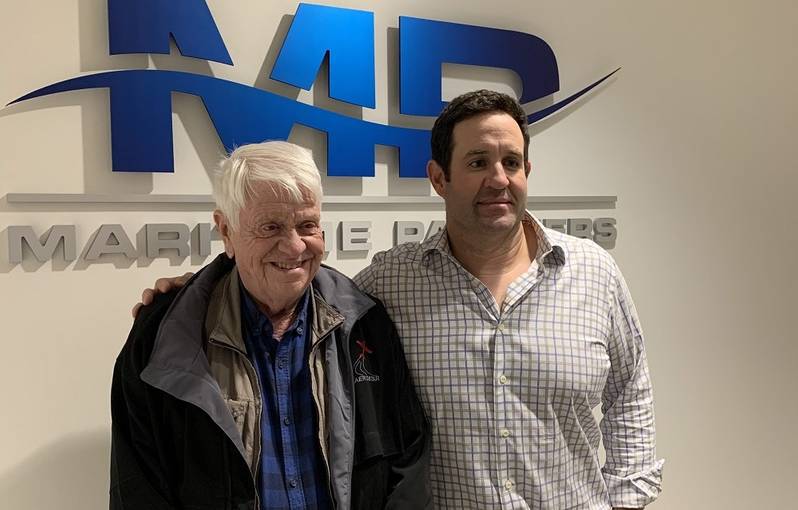