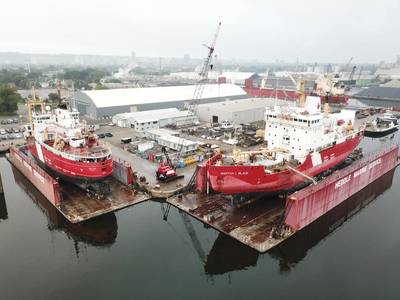 Navies, shipowners, shipyards, and organizations have offered the best of birthday wishes to Canada’s Thomson-Gordon Group, the parent company of water-lubricated polymer bearing pioneer Thordon Bearings, as it celebrates its 110th anniversary this fall.

Among several well-wishers, Claude Tremblay, Directorate General Maritime Equipment Program Management National Defence, Royal Canadian Navy, wrote: “Congratulations to Thomson-Gordon Group for 110 years of Canadian innovation and pioneering. We are proud to rely on your top-quality products. At this very moment, Thordon’s bearings are operating on RCN vessels around the world.”

Writing on behalf of Heddle Shipyards, Ted Kirkpatrick, Director of Business Development and Government Relations, said: “Thordon’s reputation for providing innovative and quality marine products as well as rapid field services are a critical part of our ability to serve our client's needs and minimize vessel downtime. We are proud to work alongside Thordon Bearings and look forward to a bright future of shipbuilding and ship repair.”

Glenn Walters, Vice-President of the Society of Naval Architects and Marine Engineers (SNAME), whose first exposure to Thordon products was in the early 90s as an Engineering Officer aboard the submarine HMCS ONONDAGA, was another to send birthday greetings.

“I did not appreciate just how much Thordon’s technology has benefitted the maritime industry until I worked on the successful nomination of Sandy Thomson to the SNAME Fellowship in 2017, and the subsequent Elmer A. Sperry Award in 2019. On its 110th anniversary, we wish Thomson-Gordon Group continued success,” wrote Walters.

Reflecting on the company’s long and successful history, George (Sandy) Thomson, Thordon Bearings’ Founder and Innovator, said: “I believe our longevity is directly tied to the quality of both products and people. Both characteristics go hand-in-hand; the kind of people we attract and keep has much to do with their perception of how quality is valued by the company.

“I know that Anna Galoni, our current CEO and my step-daughter shares this passion for excellence and both of us know that many customers are prepared to pay a premium for the best. Ultimately they benefit because it translates into reduced maintenance and operations costs.”

Galoni, who was appointed CEO earlier this year, said: “I offer my sincere thanks to all our customers for their very thoughtful comments and support. The values set by the Thomson-Gordon Group remain at the very heart of our business and will continue to be for the next 100 years. We share a deep concern about the future of our planet and concern for the environment is at the core of our beliefs and everything we do.”

Thordon Bearings was incorporated in 1990, however, the family-owned company dates back to 1911 when Major George J. Thomson along with brother William started an industrial distribution business in Hamilton, Ontario, Canada. By 1916, Earl Gordon had joined them in partnership and the Thomson-Gordon Group was born.

George and Earl steered their company towards manufacturing in a variety of applications before handing over the reins to George’s son, George J.V. Thomson, who later gave his son, George (Sandy) Thomson the chance to change the company’s direction and implement changes that would result in the Thordon Bearings we know today.

Thordon Bearings will be exhibiting a range of water lubricated and grease-free bearings and seals at Booth 1101, Europort, which takes place at Rotterdam’s Ahoy exhibition centre between 2nd and 5th November.

Japanese Trio Connects on Project to Reduce Methane Slip by 70%

As the global shipping industry is under the microscope to reduce emissions, three Japanese leaders in the maritime space: Hitachi Zosen…