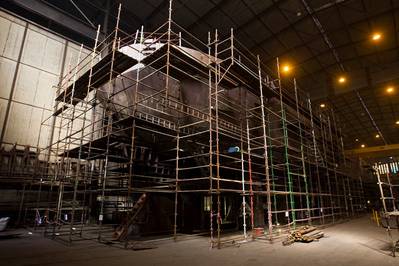 The first of TNPA’s nine tugs is about 35% complete and its hull and superstructure are 70% complete. The first tug is expected to be handed over in January 2016 (Photo: TNPA)

“This is a milestone project that reinforces the capacity and skill of South Africa and indeed Durban when it comes to competing in the global shipbuilding industry,” said TNPA program manager Eugene Rappetti, Senior Manager for Marine Operations.

“Despite the challenges of energy disruptions, the project team is forging ahead and has made impressive progress, with around 11% of the fabrication and construction on the project completed thus far,” he said.

The project kicked off in August 2014 and is set to provide a big boost to the local economy over its 42 month lifespan. It includes the manufacture of one of the world’s largest and most powerful harbour tugs.

The new fleet of nine high quality tugs will replace ageing tugboats at the Ports of Durban, Port Elizabeth, Richards Bay and Saldanha.

“The increased bollard pull of these new generation tugs meets international standards and they also feature the latest global technology. The tugs have Voith Scheider propulsion which makes them highly manoeuvrable and able to change the direction and thrust almost instantaneously while guiding large vessels safely into our ports,” he said.


Tight deadlines
Given the project’s tight deadlines five tugs will be under construction simultaneously at any given time.

Rappetti said the first tug was already about 35% completed and its hull and superstructure were 70% completed. The first tug is expected to be handed over in January 2016 to the Port of Port Elizabeth, followed by handovers every three months until the last one is launched in early 2018.

Durban based Southern African Shipyards owns and operates the largest shipyard in Southern Africa. Having also built TNPA’s previous 12 tugs, it scooped this contract - the largest single one awarded by TNPA to a South African company for the building of harbour craft - through an open and transparent process. The company’s employees have a 12 percent stake in the company, which has 60 percent black ownership.

Subcontractors on the project include well-known multi-nationals such as Barloworld Equipment, Siemens, Voith Schneider, as well as local contractors such as Bradgary Marine Shopfitters.

“This is a real demonstration of how the maritime economy can be used to unlock the economic potential of South Africa, in line with the intention of government through Operation Phakisa. Our country definitely has the skills and capacity to succeed in sectors such as marine transport and manufacturing, ship building and ship repair,” said Maharaj.

He added: “We have committed to ensuring that each tug has a minimum of 60% locally manufactured components, while partnering with international companies on the remaining aspects that cannot be manufactured here, for example the engines and propulsion units.”

He said the intention was to maximise local content and spread the benefits of the project to black suppliers, women- and youth-owned businesses.

“Ultimately South Africa will achieve a socio-economic benefit of more than R800 million as a result of the Supplier Development Plan attached to the contract,” said Maharaj.

In addition a number of national and international training and development opportunities are being created for local employees, with TNPA already set to send employees to Germany and Norway for training on the new propulsion units. They would also receive training locally for four to six weeks.

Rappetti said TNPA also had a large training program in place for engineering and deck cadets to ensure that the vessels had skilled people in place to operate them.

TNPA’s new fleet will include one of the most powerful harbour tugs in the world at 42 meters long and 15 meters wide with a bollard pull of 100 tons. The other eight 31m tugs are marginally bigger than the existing tugs, but are far more powerful, with a 70-ton pull. The older tugs have 32.5 to 40 ton pulls.

Two tugs will be allocated each to the Ports of Durban, Richards Bay and Port Elizabeth, while Saldanha, which handles the largest carriers and has had a history of vessel groundings, would receive three tugs.