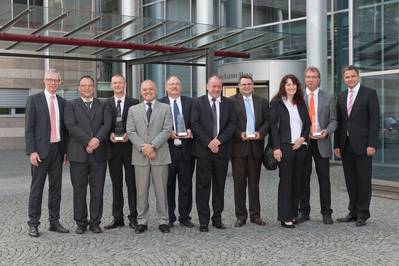 Tognum, the propulsion and energy system specialist, has honored its best suppliers for the year 2012 with the Supplier Award in five categories. Jörg Schwitalla, member of the Board of Management responsible for personnel, integrity and operations, and Erik Manning, Head of Purchasing, handed over the awards.

For the first time, Tognum presented the Supplier Award to two suppliers from the U.S. The prize in the category of "Most Improved for the Year" was awarded to the American supplier Honeywell International from Torrance in California. The Tognum Group buys turbochargers from them. Expandit from Winterset in Iowa was chosen as the best supplier to the MTU Onsite Energy subsidiary. They supply components such as exhaust pipes for gensets to the American site in Mankato. For the third time, Tognum gave the Supplier Award to Maurer Electronic from the town of Uttenweiler in Baden-Wuerttemberg, as the best supplier of prefabricated electronic parts. Harz-Guss-Zorge from the town of Zorge in the southern Harz mountains of central Germany was selected as the best supplier of blanks such as thermostat housings or cylinder heads. The best supplier to the Tognum L’Orange subsidiary is Rommel Präzisionsteile from Gemmrigheim, a company that manufactures precision turned parts for injection systems.

"With the Supplier Award, we are acknowledging our suppliers who achieve the highest levels of performance and quality. At the same time, the prize is intended to provide motivation for improving performance even more," said Jörg Schwitalla.

Tognum selected the winners from about 1,500 suppliers of production material all over the world. The jury deliberated according to the criteria of quality, logistics, environmental protection and cooperation. The results are provided to the suppliers in the form of monthly feedback. As a result, cooperation between the supplier and the company will continue to improve. Tognum inaugurated the Supplier Award in 2006 as a way of showing suppliers that their performance is appreciated and valued.