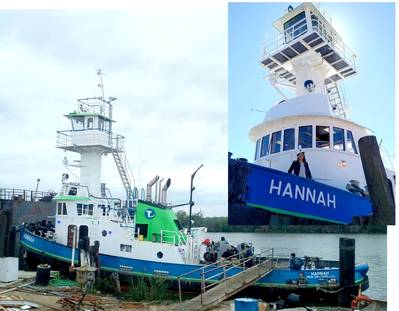 In September of 2006, Dominique Smith of the then one tug company Tradewinds Towing came to Laborde Products, to look at the S12R engine for the repower of the Miss Lis, an Alaskan built low profile tug he planned on repowering. Later that same month, the deal was made, and shortly thereafter, the Miss Lis set sail with new Mitsubishi engines and Reintjes transmissions supplied by Laborde Products. Since then, the engines have logged over 30,000 hours travelling throughout North, Central and South America.

Fast forward 10 years, and Smith has again come to Laborde Products looking for the Mitsubishi S12R to repower two sister built tugs he recently purchased to be employed on a long term charter. The addition of the two new tugs will now bring the Tradewinds Towing fleet to seven vessels.

The Rebekah and Hannah, ex Benjamin Foss and David Foss were built in 1980 at Main Iron Works and both are 80 feet long and 26 feet wide. Originally built with CAT D398 engines, both tugs will be fitted with fully mechanical, EPA Tier 3 Mitsubishi S12R-Y3MPTAW-4 rated 1,100HP at 1,600RPM, along with Reintjes WAF 562 transmissions. The repower is being carried out in Amelia, La. and overseen by Smith and Marine Superintendent Wayne Martin. The vessels will be on a dedicated route from Pensacola, Fla. to Port Arthur, Texas pulling ocean going chemical barges.

Laborde Products is the largest distributor of Mitsubishi Marine engines in North America and offers a complete line of heavy duty, fully mechanical Tier 3 engines from 400HP to 1675HP.