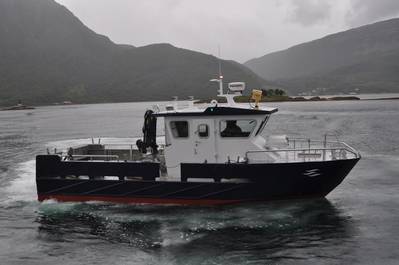 Established by Markus N. Hansen in 1919 and later with his brother Realf the company started out originally repairing and building engines. In the mid-1970s Grovfjord Mek Verksted AS progressed to building aluminium and steel fishing boats up to 88ft in length, and in the 1990s receiving contracts for the repair and building of shrimp trawlers.

In 1998 Grovfjord Mek Verksted made the decision to focus its activities on the construction of aluminium work boats for the aquaculture industry and invested heavily in new production equipment, 3D modelling - to undertake hull hydrostatic calculations, including stability, and training to improve efficiency.  A new boat shed was opened in 2007, and by 2008 GMV had delivered eight impressive new aquaculture work boats! In 2010 the third production shed was built, enabling production of 6-8 boats at the same time.  Today GMV is considered one of the premier builders of efficient work boats for the aquaculture industry in Norway.

The Grovfjord Mek boat construction and design reflects a desire for quality as well as comfort for both crew and passengers.  Managing Director Bård Meek-Hansen explained that the investment made in the yard to improve efficiencies and production has certainly helped them in the current economic climate.  As despite the downturn in the marine industry, Grovfjord Mek have continued to secure new orders and this is due to the initiative they took in the late 90s establishing themselves as a high quality aquaculture boat builder,  which was now paying off.

One of their latest deliveries is ‘MS Sonja’ to Nordlaks Oppdrett AS, a 10m aluminium alloy fast planing monohull, fully  equipped with a 2.3 tm Palfinger crane and a 1000 kg Capstan winch for salmon harvesting.
‘MS Sonja’ is powered by Single SISU 84CTIM 410 hp diesel engines driving a single UltraJet 305 HT (High Thrust) waterjet @ 2100 rpm via  a ZF286 gearbox.  This propulsion system gives the combined benefit of high manoeuvrability, low draught and a reduction in the chances of snagging lines when operating around the salmon farms.

‘MS Sonja’ has achieved speeds up to  28 knots, and even with more than 500 kg cargo on deck the speed drop is less than 1 knot!

Nordlaks Oppdrett AS is very impressed with their latest vessels construction and performance and told us that the quality of finish is evident in ‘MS Sonja’.  Onboard the fit out is modern with the latest facilities and there is even access to a drying cabinet, to ensure the crews comfort.  Nordlaks Oppdrett also took delivery of a sistership ‘Hadsel’ in 2010, and has ordered 2 similar vessels to be delivered in 2011.
Grovfjord Mek, Verksted has on order 5 vessels of this type to be delivered in 2011.