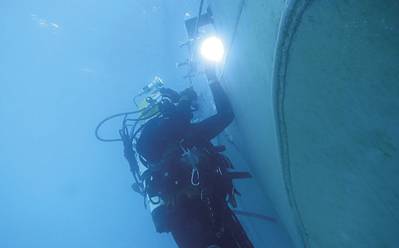 Press release -To save time and money for the owner of a 82-meter offshore supply vessel, Hydrex removed the bow thruster of the ship and reinstalled the unit after it was overhauled while the vessel was at anchorage in Dampier,  Australia. By carrying out both parts of the operation underwater the ship could stay on the project and did not have to go to drydock.

Despite the remote location of the vessel, our technical department was able to very swiftly make all practical logistic arrangements and arrange a mobilization of the equipment.

When the vessel was sailing towards Dampier, a team of diver/technicians mobilized as well.  They set up a monitoring station on a workboat and sailed to the vessel’s location. As soon as the ship was at anchorage, a small Hydrex team went on board and prepared the bow thruster engine room for the removal of the unit so that there would be no ingress of water once the unit was taken out. In the meantime the majority of the repair team started the underwater operation. They first removed the thruster tunnel grids. Next they detached the blades one by one and replaced them with blind flanges to prevent oil from leaking from the thruster.

In-house developed equipment
One of the results of their research is a cradle designed especially for thruster operations. This device has been used on many thruster operations around the world. It allowed the Hydrex divers to remove the bow thruster unit from the thruster tunnel and bring it onboard the workboat in one take using the ship’s crane.


The unit was then brought to a local workshop where it was overhauled by a technician team of the OEM. The Hydrex team remained on stand-by so that they could immediately start the reinstallation when the bow thruster arrived back on location. This kept both the travel cost and the time-frame needed for the operation to the absolute minimum.


The overhauled thruster unit was brought back inside the tunnel using the reverse procedure. Next, another technology developed by Hydrex in-house was used to close off the thruster tunnel: our flexible mobdocks. Mobdock is short for ‘Mobile mini drydock’ because they enable our diver/technicians to create a dry environment to work in, while the vessel stays afloat. These mobdocks have been used during thruster operations for 20 years now. Because they are flexible they can be shipped to anywhere in the world by plane very fast.


The diver/technicians repositioned the gearbox using chain blocks and secured it with bolts. All thruster propeller blades were then reinstalled one by one and the thruster unit was reconnected to the engine room.


After a successful leakage test, the team removed the flexible mobdocks. Once the tunnel was flooded, the tunnel grids were reinstalled. This concluded the operation.