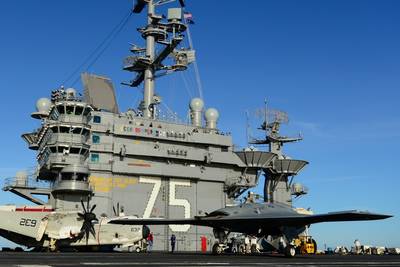 During the test phase, UCAS deck operators used an arm-mounted control display unit (CDU) to remotely control the aircraft.  Gerrit Everson, one of the operators who controlled the X-47B, said the UCAS demonstrator displayed excellent integration with Truman's flight deck.

"With the CDU, we followed the aircraft director's signals to move the aircraft left or right, over the arresting wire, to and from the catapults and to various spotting positions," said Everson. "These tests proved that we can taxi the X-47B with the precision that an aircraft carrier's flight deck requires."

Lt. Cmdr. Larry Tarver, Truman's aircraft handling officer, said every test on the aircraft brings the Navy one step closer to unmanned carrier aviation. "Nobody has ever done this before," said Tarver. "Unmanned aerial vehicles (UAVs) have flown all over the world, but an X-47B has never operated on an aircraft carrier. Every evolution with this aircraft is taken step-by-step because we don't fully know how it will react to a carrier environment. It's a little out of our comfort zone, so our safety precautions are maximized.

"  "Every exercise completed out here is data gathered for the UCAS-D team," said Tarver. "A carrier environment can only be simulated to a certain extent on land, so we have to take our time when it comes to evolutions like this."

The X-47B is scheduled to complete taxi testing before Truman returns to its homeport in Naval Station Norfolk.