Alan Haig-Brown began his career as a commercial fisherman on the B.C.... 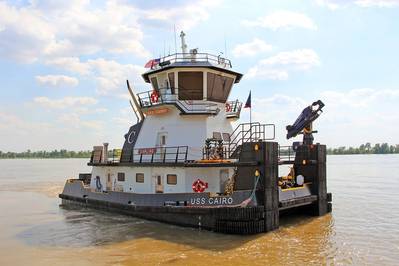 Over that past 15 to 20 years there has been a revolution in U.S. ship docking tugs. Larger container ships and tankers made obsolete the conventional single and twin propeller tugs that could serve either line haul or ship docking functions. Pilots and insurers wanted modern technology that, more often than not, meant stern mounted azimuthing Z-drives.
This revolution eventually includes ship docking on the Mississippi around the Port of New Orleans. But mixed in with the ship moorings and piers, were the fleets, where loaded barges from up river were exchanged for empties or loaded to go back up river. When the big tows of 30 to 40 barges come down river, they have barges bound for different customers to be dropped off at various fleets that line the 100 miles of the river between Baton Rouge and New Orleans and beyond. A typical Mississippi barge is 195 by 35 feet and carries 1,500-ton cargos of grains, coal or other bulk cargos.
A big tow coming down the river below Baton Rouge is like a floating island being guided in the river current by an 8,000 or 10,000 horsepower line-haul boat. The captain of the line-haul boat works with fleet boats to hold up on the river while the fleet boat takes individual barges off the tow and moves them to the fleet along the riverbank. At the same time the fleeting boat may also add barges from the fleet to the tow. When the river is in freshet this all has to be completed with some dispatch. The greatest challenge for the fleet boat operator is when laying a barge onto the up river end of the fleet. In this maneuver there exists the very real, and not infrequent, danger of getting broadside to the upstream rake of a barge bow and being swept underwater by the force of the river current.
Typical fleeting boats are 800 to 1,500 HP and in the 60-foot range. This year, by introducing the first azimuthing Z-drive fleeting boat to the river, the Carline Companies have brought the modern concept of ship docking tugs to this previously neglected class of vessel. Their new 68 by 34-foot fleeting boat, the USS Cairo, is setting the standard, not only for safety, but for efficient barge fleeting on the lower Mississippi. While safety when down-streaming barges was the prime motivation for Carline to have this boat designed by Christian Townsend of CT Marine, there are also gains in efficiency. As operators of harbor tugs have long been aware, the Z-drive can deliver full thrust in any direction almost instantly, where as the conventional rudder set aft of the propeller and even the flanking rudders set ahead of the rudder as is the practice on many inland river towboats, will sacrifice time and power by the inefficient nature of the conventional drive and rudder system.
While the Z-drive tugs handling ocean class ships are typically in the 5,000 HP range, the demands of fleeting 200-foot barges are more modest. For power on the USS Cairo, Carline choose a pair of six-cylinder, Tier 3, Cummins QSK19 750 HP (Heavy Duty) mains turning into Thrustmaster TH750MZ Z-drives with 57-inch propellers in Nozzles.
A pair of Cummins 6BTA-powered 85-kW generators meets the towboat’s electrical needs.
In keeping with CT Marine’s recently designed conventional towboats, the USS Cairo has a high visibility octagonal-shaped wheelhouse providing additional operator ease and safety. An elevated foredeck provides safer access to empty barges for the deckhands.
• Cummins • Mississippi • Port of New Orleans
Email

Engines manufacturer Fairbanks Morse said it has been awarded a six-year indefinite-delivery/indefinite-quantity (IDIQ) contract by the U.S.