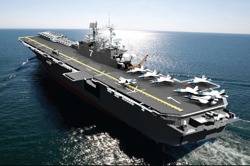 Like the future USS America (LHA 6), LHA 7 has an increased aviation capacity to include an enlarged hangar deck, realignment and expansion of the aviation maintenance facilities, a significant increase in available stowage for parts and support equipment, and increased aviation fuel capacity.

The USS Tripoli will be the third ship to bear the name Tripoli. The name commemorates the capture of Derna in 1805 by a small force of U.S. Marines and approximately 370 soldiers from 11 other nationalities. The battle, later memorialized in the Marines' Hymn with the line "to the shores of Tripoli", brought about a successful conclusion to the combined operations of the First Barbary War. The first USS Tripoli, an escort carrier, fought in the battle of the Atlantic during World War II. The second, an amphibious assault ship, earned nine battle stars, a Meritorious Unit Commendation, and a Navy Unit Commendation for service in Vietnam.

"USS Tripoli and the proud heritage the name represents will be an inspiration for generations of sailors and Marines who serve aboard and those who come in contact with her, reminding all the freedoms our Navy protects are as vital today as they were centuries ago," Mabus said.