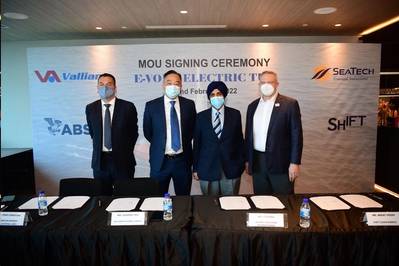 A new all-electric, zero carbon emissions harbor tug currently being built at the Vallianz PT USP shipyard in Batam, Indonesia is expected to be the first of its kind in the Asia Pacific region.

Based on the “E-Volt Electric Tug” design by SeaTech Solutions International Pte Ltd, the e-tug will be driven by a fully-classed electric battery system provided by Canadian-based Shift Clean Energy. This follows a recent memorandum of understanding between Vallianz and Shift to collaborate on vessels that require electrification solutions.

Measuring an overall length of about 24 meters, the e-tug will be powered fully by battery and equipped with azimuth propulsion. It will have a bollard pull in excess of 60 tonnes with service speed of over 12 knots.

Darren Yeo, Executive Vice Chairman of Vallianz, said, ““As the first of its kind in Asia Pacific, the e-tug will yield environmental and economic benefits to the end- users, industry and community at large, in achieving their zero-emission environmental targets. We expect this e-tug to transform the way port operations are carried out. The operational e-tug will reduce at least 150 tons of nitrogen oxide (NOx) and 2,000 tons of carbon dioxide (CO2) emissions annually versus a conventional tug. This is equivalent to removing 500 typical passenger vehicles from the road.”

Also part of the project is the onshore charging infrastructure, which will allow any vessel to be seamlessly integrated into existing port operations. In addition, the digitization platform installed on the e-tug – from its battery management system to auxiliary equipment systems – will enable the end-user to remotely monitor and optimize the vessel’s operational efficiency.