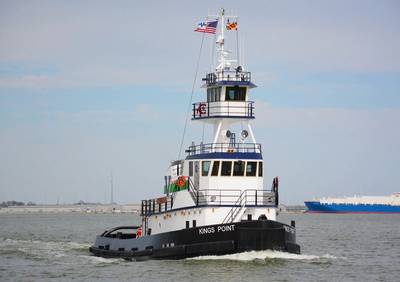 The Vane Brothers Company, a marine transportation provider headquartered in Baltimore, has taken delivery of Kings Point, the latest in a wave of Maryland-built tugboats.
Constructed under the supervision of Vane Senior Port Captain Jim Demske, Kings Point is the 10th of 14 “Sassafras Class” tugboats contracted by Vane Brothers through Chesapeake Shipbuilding of Salisbury, Maryland. Kings Point also has a sister tug, Fort Schuyler, that was launched by Chesapeake Shipbuilding in April and is expected to be delivered this summer.
“All of what we do at Vane Brothers is geared toward our company mission of providing customers with quality service in the safest and most efficient way,” said Vane Brothers Company President C. Duff Hughes. “The evolution we have helped bring about in tugboat construction speaks to the impact of our mission, and we are excited to have teamed with another Maryland-based company to make this happen.”
Hughes added, “Vane Brothers constantly strives to build a better, safer, more productive working vessel. That’s what we have achieved with Kings Point and also what we will see with Fort Schuyler.”
Measuring 94 feet long and 32 feet wide with a hull depth of 13 feet, Kings Point is similar in many respects to the previous nine tugboats built for Vane as part of the Chesapeake Shipbuilding contract. The vessel, which required 13 months to build, is equipped with twin Caterpillar 3512 main engines producing a combined 3,000 horsepower, and operates with a single-drum hydraulic towing winch. State-of-the-art componentry is at the captain’s fingertips in the wheelhouse, which features mostly wooden accents for a more traditional look.
Kings Point is the second tugboat built for Vane Brothers that incorporates a Tier 3 engine, which creates lower emissions and is more technologically advanced than previous generations. The Vane tugboat Fells Point, delivered in 2014, also featured an environmentally friendly Tier 3 engine.
One new development onboard Kings Point and subsequent tugboats being built for Vane Brothers is the use of "soft‐core" panels and heavy, fire‐rated doors throughout. The soft-core panels, which are in place of Fiberglass Reinforced Plastic, consist of steel sandwiched to a thermal, acoustic insulation. This offers a safer and quieter living environment for the crew.
“Every inch of this boat has been thought out with efficient operation, crew comfort and crew safety in mind,” said Captain Jim Demske, who has now supervised the construction of 25 tugboats for The Vane Brothers Company.
Kings Point has joined Vane Brothers’ fleet based in New York.
The names Kings Point and Fort Schuyler pay homage to a pair of highly respected, mid‐Atlantic maritime education facilities. The U.S. Merchant Marine Academy operates out of Kings Point, New York, while the State University of New York (SUNY) Maritime College has a Marine Transportation Department based at Fort Schuyler.
• Caterpillar • Fort Schuyler • Maryland
Email