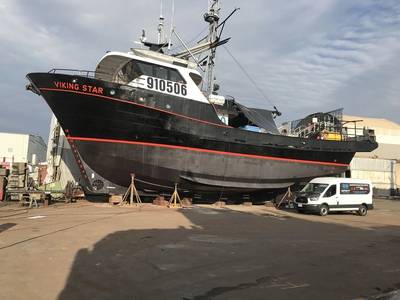 In 1978 Allied Shipyards of North Vancouver built a series of three big steel purse seiners that have become much-admired classics amongst the excellent fleets of British Columbia. In the years since the boats have changed owners and changed names. One, the Viking Star, has even shifted from being a dedicated purse seiner to a transport vessel for salmon farms for the Walcan Seafood plant on Quadra Island.

The success of the design, of which more than a dozen were eventually  built, is often attributed to a drawing on a restaurant napkin by designer Ron Burchett and fisherman Alfred “Hutch” Hunt. Legendary builder Arthur McLaren of Allied Shipyard worked with naval architects at Cleaver and Walkinshaw to perfect the design.

Proof of design and construction is always in the performance. The Viking Star and her sisters have, in this instance, given ample evidence of excellence. For a forty-year-old vessel quality is also reflected in the maintenance, again the Viking Star and her owners demonstrate a high level of proficiency

In recognition of this quality the owners recently decided to give the boat a new engine. In keeping with the traditional excellence and contemporary innovation, a new in-line 6-cylinder, 4-cycle, Cummins KTA19 marine engine was chosen to replace the outdated and tired two-cycle 8V149 Jimmie. At 500 HP the new engine matched the original power of the GM engine but the renewed vigor earned a new Twin Disc 5170 marine gear. The new gear came in a 5.03 ratio compared to the old ratio of 4.04, so the original 3 blade prop was taken from 61.5D X 40P to 61.5 X 53 to get the torque curve into the right range for maximum performance and efficiency.

The job, complete at Arrow Shipyards by a team led by Gerry Harris from Infinity Marine Systems of Gibsons, BC involved creating an access to the engine room through a door cut in the hull at the waterline.  After moving a Genset and a couple hydraulic power packs out of the way, and with the creative use of come-alongs as well as a lot of careful wrench work, the old came out and the new went in with a minimum of down time. Using the access through the hull side avoided having to cut into the fiber-glassed fish hold. With 43 years in the industry, Gerry Harris explains that their work takes them from the Northwest Territories of Canada all the way down to the coast of Mexico.

After only 6 weeks out of the water, the Viking Star was back in her element. She made 11.3 knots on sea trials, up from a previous best of 10 knots and is projected to burn 20% less fuel.

Australia-based VEEM, a company designing and building marine propulsion and stabilization systems, will manufacture a pilot…